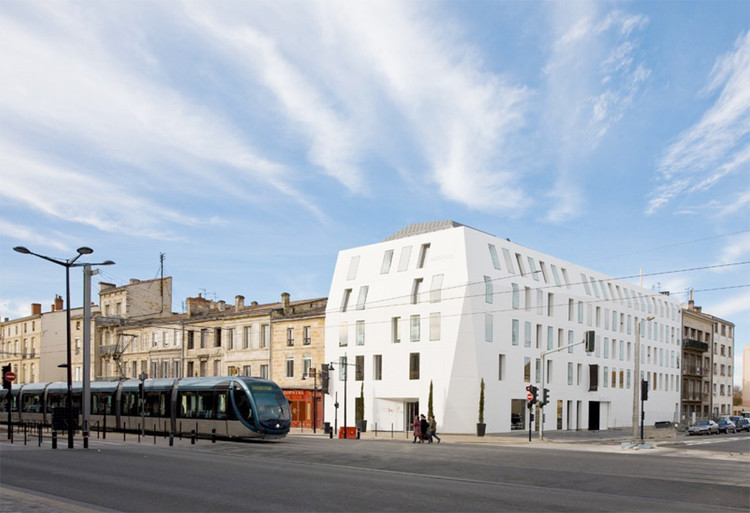 Text description provided by the architects. The Seeko'o hotel is positioned on Bordeaux's waterfront at the intersection of the Quai de Bacalan and of the Cours Edouard Vaillant in a neighbourhood situated between the Chartrons and Bacalan, to the north of the city.

Upstream, the waterfront façade built in the 18 century is characterised by the homogeneity of the stone buildings and its unique architectural continuity. Looking out over the river, this façade is one of the main gems of the heritage of the city.

In this particular, somewhat abandoned part of the waterfront, the heterogeneous architectural identity offers a much more anomalous façade. As for the Cours Edouard Vaillant, severely bombed during the 2 World Ward, its outward appearance is rather austere with little distinctive character.

However, this neighbourhood, with the recent plans for Bacalan, the marina, the future bridge opposite the Cours Lucien Faure, the recent renovation of the hangars and quaysides, is developing fast. It is without doubt one of the major urban challenges for the development and revitalisation of the northern part of the city. The hotel is part and parcel of this new urban dynamic and benefits from a vast, panoramic view over what goes to make up the façade of Bordeaux. It offers a new focal point and in the longer term will prove to be a hinge point for the necessary connection to the future development of the northern neighbourhoods. Driven by that context, the project can thus afford to be resolutely modern without for all that turning its back on its belonging to a greater ensemble steeped in the history and memory of the locality. A regular pattern of evenly proportioned openings covers its two facades. These windows and French windows, their height exceeding their width, ensure a remarkable visual continuity in the extension of the façade of the waterfront.

The project, devoid of all historic, stylistic references, emphasises the total lack of decoration and the pure, clean lines of its design. The choice of a smooth, abstract outer skin made up of large, immaculately white plates of CORIAN, reinforces the idea and serves to create the strong identity of the project. The specific arrangement of the corner angle, characteristic of the buildings constructed in a similar way, offers an original, dynamic and energetic design in the shape of the prow of a ship.

The crafting of the skin of the building in the form of furrows melds both the façade and the roof, enabling, thanks to two slight inflexions, a physical connection with the cornices of the neighbouring buildings. The resultant shape follows the slope of the traditional slate curbed roofs, thus highlighting the flowing lines for greater lightness.

At a second glance, the layout of the openings brings a new complexity to the usual arrangement of stone facades. The glazing installed either on the bare exterior or on the bare interior creates a subtle interplay of raised areas, hollows and reflections. Certain windows, dressed in silk-screen printed panels, are reminiscent of the past activity of the waterfront.

The final level of the hotel, treated as an attic, is set recessed from the facades. The rooms there benefit from an unspoiled view, over the floating docks and the suspension bridge to the north and over the river and the hillsides of the right bank above the hangars to the east.

The shape of the plot of land and the statutory setback have dictated the morphology of the building, the floor plan of which is particularly unusual for a hotel. All the rooms face outwards over the streets and are served by a corridor with natural lighting from the centre of the plot.

On the ground floor, guests will be welcomed in a vast open space with wide bays opening on to the exterior. On the 1 floor, the prow of the building houses the bar and dining-room. A hammam, sauna and meeting/conference room round out the services offered to guests.

The spacious bedrooms, ranging from 28 to 55 sqm , offer a sober, graphic unity. The light, silk-screen printing on the sound-proofed windows contributes to enabling guests to bathe in the visual universe of the waterfront while at the same time benefiting from a remarkably quiet atmosphere. The low ceiling of the ground floor further emphasises this impression of holding the waterfront as a distance.

An attractive venue, rich in sensations and emotions, everything has been designed to plunge guests into a dramatised setting ideally suited for a complete change of scenery. 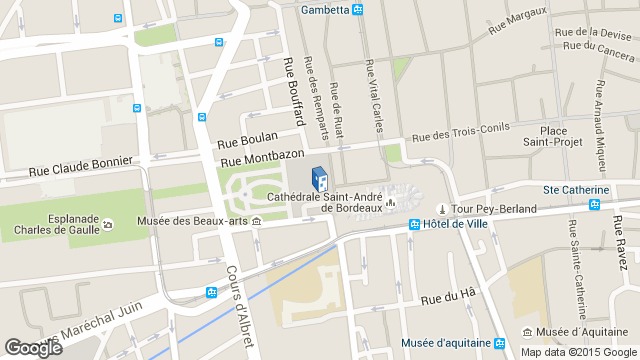 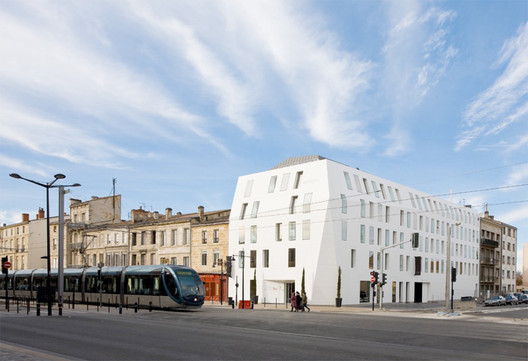