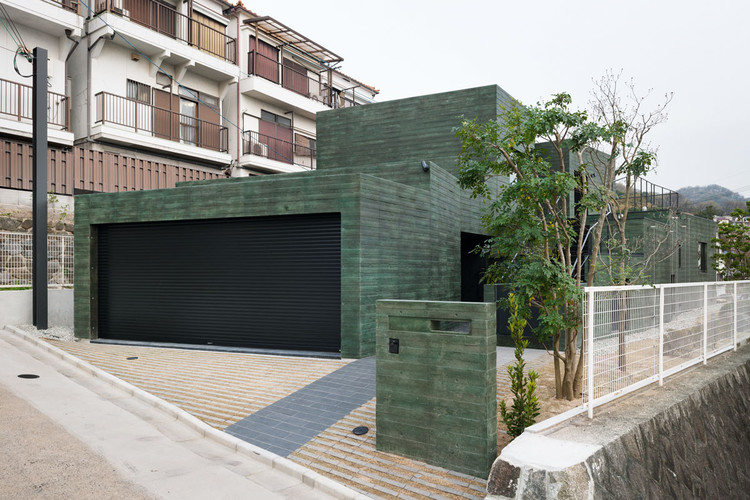 Text description provided by the architects. Located on the hillside of Mt. Ikoma, this private residence dominates the city of Osaka. The goal of this project was to create a group of multiple spaces, each with different kinds of qualities. This allows the client to choose the uses of the space for each occasion by perceiving the changes of the surrounding environment over the time.

Form responding to the terrain

The site is developed along a stone wall that extended across the terrain.Multiple boxes, scaled to meet the utilities and the priorities were placed according to the contour line. Then these boxes were then deformed to respond to the views, the greenery, the activities, and the surroundings, which determined the form of the building. Spaces between the boxes became a cave-like sequence that opens up to the Osaka plain.This design generation process mediates the natural and the artificial, maximizes the use of the whole site, and creates diversity of utility and experience.

Surface responding to the time

The surface of the building was aimed to wear expressions that changes as with a creature. A condition between monochrome/color and artificial/natural was created, so that it magnifies the changes in hue and saturation each seasons. It looks like a rough engineering work, while it also looks like a rock covered with moss. It wears pitch black darkness, while it also wears countless shades of green.

Grain and patterns for the concrete framework, mold and the color and gloss of the water repellent sealer were carefully examined and chosen, so that it would maximize the effect on the surface.

The environment stimulates the client to select a each suitable space for each occasion. This type of inhomogeneous space perception is realized by the gap between the boxes.

Each box with different plans, height, and views supports everyday life as a functional box such as bedrooms, kitchen, etc. The boxes are also designed to allow the clients to change the usage. But at the same time, various blank spaces are created that is yet to be defined. Difference of the sizes, views, lights, colors, and thermal environments are connectively distributed in this space. The client would search through, view, stop, and relax in the heterogeneity along the blank spaces.

Connecting with the environment

Thermal environment is also designed to connect to the surroundings. By providing at least 2 windows for each boxes, and by placing the gap between the boxes along the contour line, it allows the wind that blows constantly along the mountain terrain to pass through. Further, by arranging the tall staircase box in the middle of the building, it allows the chimney effect and wind circulation to occur, even in the state of windlessness. Moreover, in order to redistribute the rainwater to the soil and the plants on the site, a rainwater utilization system was adopted on the roof of the building.

In this site there are 3 layers of thermal environment (in/between/outside the boxes), that allows the client to select the usage according to their thermal perception. This gradient in the environment is also attempts to discriminate the physical perspective of indoor with that outdoor.

The entire site is converted to a heterogeneous group of spaces, which differs from a space that is optimized towards a specific set of values. Rather than that, this project composes an architecture that is highly receptive of conditions changing over time and a diversity of values, suggesting an optimum solution.

When synchronic differences created by the diverse shapes overlay on diachronic transitory experience in the diverse natural environment, the created set of spaces captures the diversity in the time axis and in the depth of space perception.

By connecting antithetic matter - natural/artificial, limited/free, mutable/immutable, material/immaterial – in a gradient flow, it creates an environment this is in some way like a part of nature that has been there forever, and at the same time like a modern artifact that supports functions of daily life.

This place originally holds the beauty of nature and artifacts making full use of each other, which could also be stated as an architecture that integrats with the body and accepts diversity of time and function.