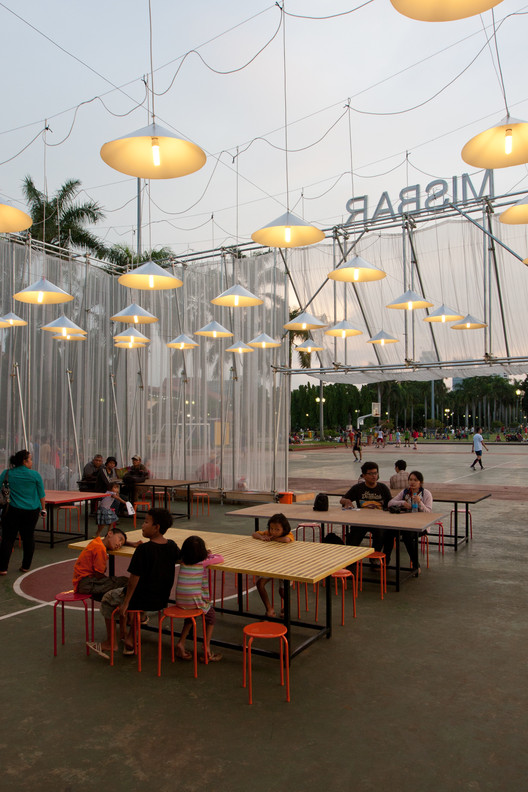 Text description provided by the architects. Kineforum Misbar was a temporary open-airw cinema built as part of the 2013 Jakarta Biennale, an international contemporary art event held in the Indonesian capital. It was the result of collaboration between architects Csutoras & Liando (http://www.csutorasandliando.com) and Kineforum (http://kineforum.org/web), a non-profit organization that runs the only cinema in Jakarta dedicated to international and local art-house and independent movies.

The project was driven by a social-cultural agenda. The main objectives were to promote Indonesian films and to create a venue where people of all backgrounds can watch a movie on the big screen, including those, who cannot afford the shopping mall multiplexes that dominate the local cinema scene.

The project was named Kineforum Misbar in reference to the inexpensive, traditional Indonesian open-air cinemas, which are now almost extinct in Jakarta. The cinema screened movies for free last December.

The cinema was located in the centre of Jakarta, at the base of Monas, Indonesia’s national monument. The perimeter of the 38x14 meter structure was clad with a 6 meter tall translucent ‘curtain’ to give the cinema presence in the large open areas surrounding Monas and to define the boundaries of the spaces inside. Besides the cinema itself, the ‘curtain’ façades also contained a generous foyer space and a pavilion between the cinema and the foyer. The pavilion housed a ticket counter and a snack bar. The cinema featured a tiered seating area, a professional projection screen, digital projector and surround sound system - all the necessary ingredients of a state of the art cinema.

The foyer space was envisaged as a social place, an aspect of cinema that has been disappearing in Jakarta with the growing prevalence of multiplex cinemas. With its canopy of lamps overhead, the foyer became an atmospheric place to meet, to have a drink or a snack, to hang out before or after a movie.

At the base of the façade a bench ran along the perimeter. During the day this was used as a place to rest or to watch the action on the neighbouring futsal fields, while at night it served for passersby as a place to sit down to take a peek at what’s playing inside.

The building was constructed in 10 days, using inexpensive materials, which were reused after the event. The structure was a rented scaffolding pipe system, which is highly adaptable and allows fast assembly. The material used for the façade curtain was agronet, a perforated fabric typically used in agriculture. Floors and walls were made out of plywood. The latter were decorated with an abstract pattern of colourful triangles, which animated the surfaces and showed direction to the visitors. The lampshades were cut from thin aluminium sheets and sprayed white on the inside to more evenly reflect light.

The project was supported by the Jakarta Arts Council and the Jakarta City Government Tourism and Culture Department. 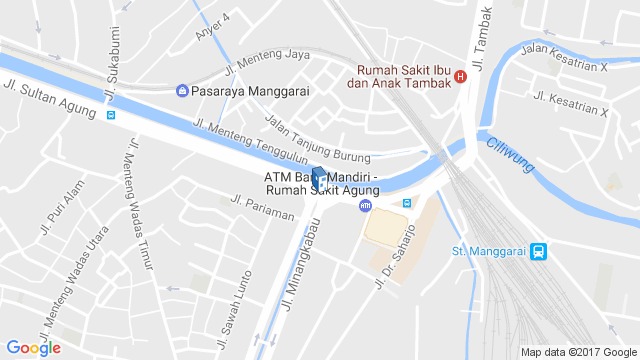