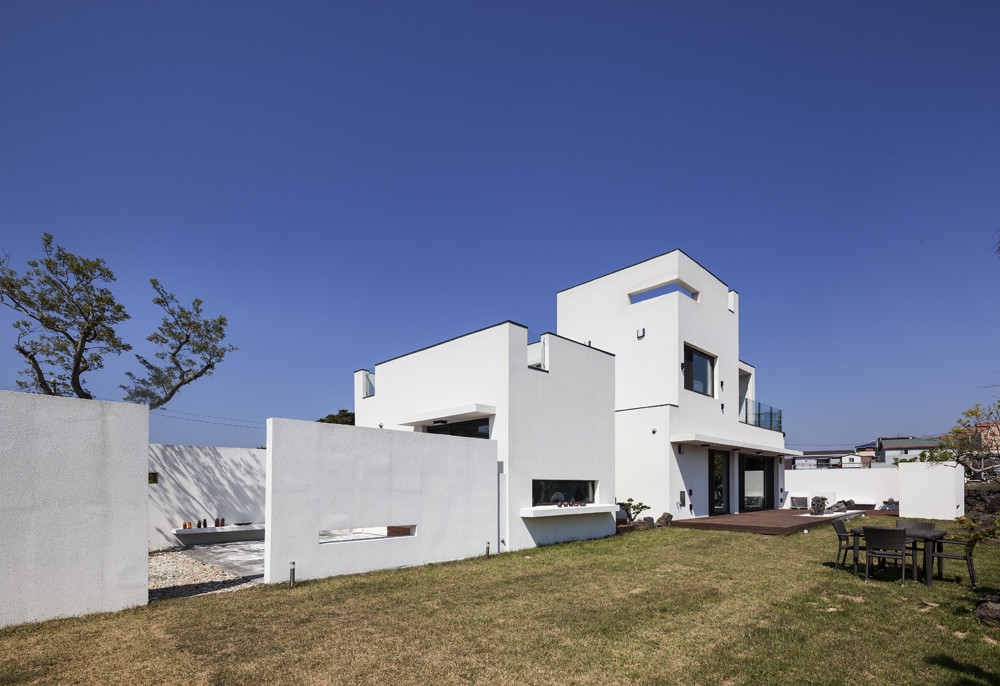 Text description provided by the architects. SM'1 House is the house of the architect who has his wife and two daughters. Everyone who constructs wants to build his house but it's said to be difficult to do such a thing easily. The excuse that architects have not established their construction world, vague fear and hesitation seem to make they feel a heavy burden.

I had been in such troubled and delayed it, during thinking 'I have to do something as a architect and a father' for the closest people called 'Family', I watched a father's story on the media accidentally and the story haunted me. It's said that the house is a place where children's value memories are and makes them keep their memories of childhood a lot.

However, most people build their house tremendously for a couple after children grew up and leave their parents. I blamed myself for ' Are there spatial sympathy of family during living the apartment for dozens of years? How often do we communicate with each other? in that space". During I was thinking about these questions, I liked to build a house as soon as possible and then I put the thought in practice. At home, I don't know how long I live in the house but I want to dream beautiful memories and the happiness of my family.

Ora 3-dong, Jeju-si, Jeju Special Self-Governing Province is located around the existing settlements that is in the old town(Juju-si) in current Juju and in the center of New Jeju. Around it, houses and villas, warehouses, etc are in the village so they make people feel a bit messy. The site is land which gives a cozy and comfortable feeling due to being well-lighted having a full south aspect. To the south, there is Hallasan(Mt), to the north, there are the airport and the offing so it has nice view.

The main concept of the deployment plan is if possible, to direct the space with different feelings by setting the relationship of the outer space in each room respectively. The space divided into this is planned to hold features of Jeju's traditional house deployment, several small yards and a front yard have appropriate hierarchy in the yard and try to communicate organically each other. In addition, the feeling of the yard is a lyrical space where I saw in the grandmother's house in the childhood, and the same concept in lighting plan to direct was applied and planned.

The main room(large Kudul), kitchen(Jeongji), guest and tea room(Barkgeori), hobby room, utility room(Gopang) are planned focusing on the living room(Sangbang) on the first floor, it's planned that the living room is in the center of the house and family members can get together, the living room always gives bright and spacious feeling by placing my housewife's flow and eyes openly with opening it with the kitchen.

In particular, I made both the front yard and inside-back yard come to indoor. In the guest room, Pongnang yard emphasizes lyricism to remind people of neat Jeju stones and Pongnang on the past ollegil.

The facade reflected on the form of flat arranged as the three-dimension moderated decorations as much as possible to emphasize neat feeling. Neat and clean white stucco and glass has the intention not to disturb surroundings by embracing natural colors.