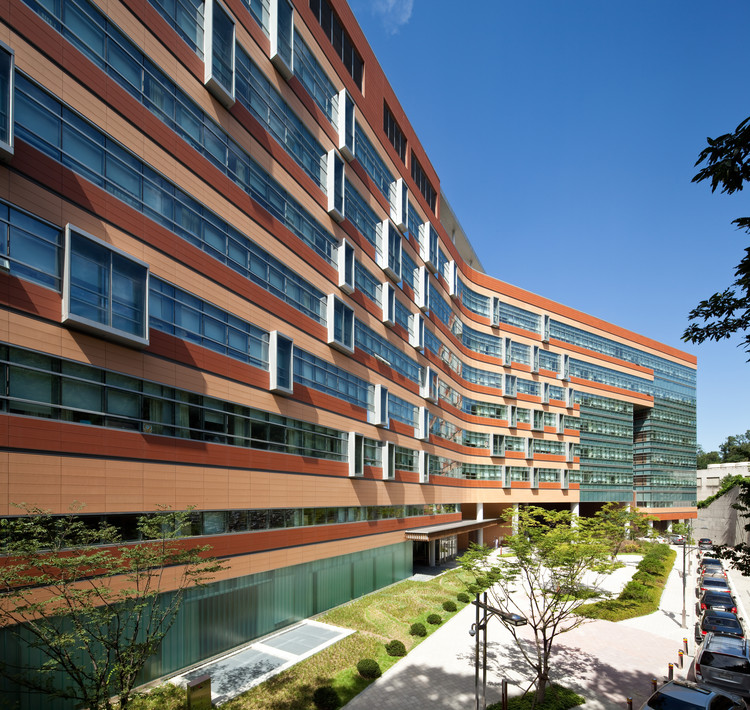 Established in 2003, Bundang Seoul National University Hospital is located in a metropolitan area with high demand for medical services and excellent accessibility, and has a good natural environment adjacent to Bulgok Mountain and Tancheon.

This hospital has been growing quickly as a district general hospital in a short period of time with the brand of Seoul National University and the top medical team. However, such rapid advancement brought about a limitation of growth because the supply was short compared to the fast increase in demand, that is because beds, medical facilities and parking spaceswere not enough.

In order to quickly solve such problems and to enter into a new development phase, Bundang Seoul National University Hospital decided to choose a contractorfor turn-keybased construction. Starting in Summer 2009, this project was finally completed in Spring 2013 through detailed design, design change process, construction work of three years and continuous design support after we were selected as the qualified architect for the detailed design through deliberation on December 30, 2009.

The new building is located on the right slope from the entrance to Bundang Seoul National University Hospital. The site is adjacent to the main building and inclines towards the west. We faced constant questions and concerns until the last second when the final proposal was confirmed, due to discord about issues such as a connection with the existing main building, the shape of the land and a consideration of direction.

Then, the layout alternative with the shape of the land was finally confirmed as the last proposal. If the layout causes inconvenience, it will result in fundamental restrictions that cannot be overcome even though the building has a good direction or other conditions are satisfied. The new building of Bundang Seoul National University Hospital starts from the premise that the relation with the existing building will be set up and the issue of the western ward will be solved.

The lower floor's outdoor transition zone of the new building keeps the overall sense of unity with the shape and image connected with the main building. For the new lobby, a drop-off zone with enough length for convenient loading has been designed, and a curved form is planned to form a connection to the main building's lobby.

For the lower parts, glass and terracotta panel are used as the main exterior materials. Terracotta finishing material, as a clay material like brick, creates the hospital's warm and eco image and makes a proper contrast and balance to the sharpness and refinement of the glass. In particular, the three-dimensional pattern using terracotta panel and lumber is extended to the main building from the new building. It works to combine the two buildings.

The upper floor's ward should have an advanced image of the future andexpress the new hospital's image. However, because it is placed at the entrance, it is likely to impede the main building's representation and to deter the hospital's awareness. Therefore, we designed it with the shape of going back gradually by approach line in order to minimize the visual interference with the main building. We also made the layout along the outdoor transition zone flow and tried to maintain the independence of each by properly separating from the main building's wards.

In order to respond to unavoidable western ward arrangement and noises from the front entrance, the advanced double skin facade system has been applied to the ward's front at Bundang Seoul National University Hospital, a first among hospitals in Korea. Because the double facade system is equipped with a separate external motor-driven roll screen, it can minimize glare and damage caused by direct solar radiation.

Through an individual control in the patient's room and multi-colored screens, it can be utilized as a new design element, giving diverse changes and vividness to the curtain wall. Also, the temperature control function of intermediate space between the outer wall and double skin facade reduces the system loading, which results in the reduction of energy consumption. Due to concerns about cross-infection of patients' rooms and the restriction of construction costs, we did not conduct the work for other parts except the double skin facade system's nature-vent function.

Each patient's room is equipped with the nature-vent projected window system that applies some functions of the double skin facade system, so that it forms the unique and characteristic facade. As the air flow is constantly maintained through such system, the hospital can produce a pleasant and refreshing room environment.

Patients' rooms at the front and back of the new building have an optimum healing environment by protecting from unpleasant environments or by actively applying necessary elements through use of the double skin facade system or projected window system.

The new building's backyard faces Bulgok Mountain and the wind from Bulgok Mountain blows past the Health Promotion Center, passing through two-stories-high Piloti and blows to the roof garden and Tancheon. The new building has enough open space and harmonizes with the surrounding environment through the nature-like image creation, and makes an eco healing environment by containing nature in the outdoor garden, front square, Piloti and indoors.

Parking spaces are extended by increasing facilities. We aimed at improving the operating efficiency and maximizing the effect of the extension through the circulation system's proper control, not physically increasing the parkingspace. Primarily, we added the vehicle entrance and tried to improve the accessibility and value of the existing entrance that fewer people used. The front square was surrounded by the greatly extended loading space and the one-way circulation system connecting the new or existing vehicle entrances around the newly-formed green space. Between them, we added the taxi wait zone. We tried to represent the hospital's image of change and growth continuously through unimpeded vehicle flow.

The new building's lobby connects to the main building's entrance space along the loading space surrounding the front square. The architectural purpose of the building's lower part is to reorganize two buildings in one hospital through connecting them. Then, such purpose is well expressed in the lobby, and the internal space is extended toward the main building and has a long, curved shape. The lobby has been designed with the front curtain wall of S.P.G. form over two floors. Because this area meets the open space from the first basement level to the second ground level, it maximizes the lobby's symbolism and openness and enables people to easily search the wards.

Thisnew building has become anew face of Bundang Seoul National University Hospital, since established under the name of a cancer hospital and a brain and nerves hospital, and the main building is under renovation around the wards. When the renovation work is finished, the hospital will prepare for another change and will start another work. Built up in the middle of change and growth, the hospital is expected to work as the future's affirmative bridgehead. 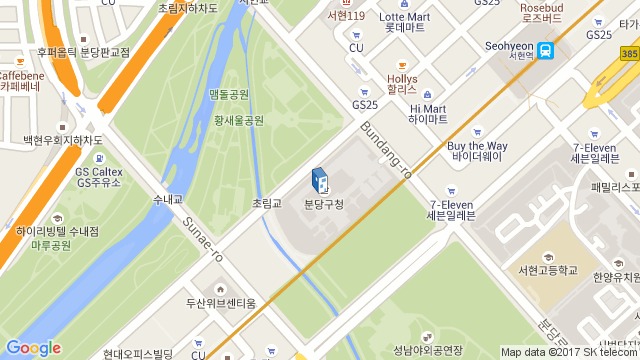 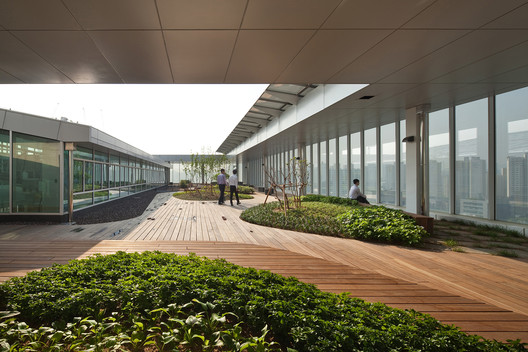