The concept of the new Shanghai Flower Garden Square by Real Time Architecture (RTA-Office) is a reinterpretation of a traditional Chinese home. Ten villas merge to form a series of sequential spaces, replacing the conventional building type of the single, stand-alone villa. The 45 square meter landscape, thus, finds its way throughout the units’ interiors, synchronizing interior and exterior user activities.

“The idea is not to provide a building,” explains RTA, but to create spaces that enhance the human experience. Thus, while plans, sections and elevations were ultimately drawn, the design was generated based on the user’s experience in relationship to light, the outdoors and other users.

Approaching the site, three access points from the main street afford the users the ease of circulation in and throughout the ten villa units. The plan, fragmented by winding paths that weave between vegetated areas, open pools and terraces, blurs the boundary between inside and out, the natural and man-made.

Three varying materials combine to compose the enclosures. Silver metal, the main exterior material, provides a slight reflection of the surrounding vegetation upon the opaque surfaces. Wood, through its yellow-red hue and coarser texture, provides a warmer, more natural interior.  In contrast, glass clads the southern façades of each villa enabling natural sunlight and exterior views to harmonize the user with nature.

The project is currently under construction in the Hongqiao District of Shanghai. 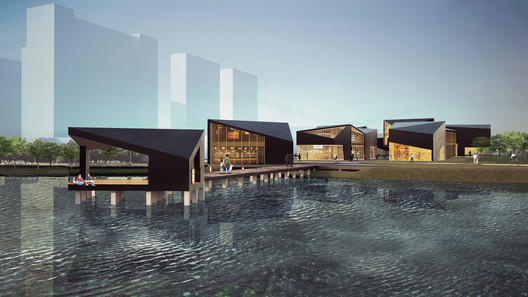