OMA has won an international competition to design Pont Jean-Jacques Bosc, a bridge across the river Garonne in Bordeaux, France, that will link the municipalities of Bègles and Floriac. The 44m by 545m bridge, which will act as "a generous new public space" and "an urban planning intervention" for the city, giving priority to pedestrian traffic, is the first to be realized by OMA. It is scheduled for completion in 2018.

According to Clément Blanchet, director of OMA France, the bridge "is not the ‘event’ in the city, but a platform that can accommodate events of the city [...it] may be the least technical, least lyrical, but [it is] the most concise and effective structural solution.”

The architect's description of the project, after the break...

From the Architect. Positioned at the heart of the Euratlantique project, Pont Jean-Jacques Bosc provides a link between the municipalities of Bègles and Floriac. But more than simply connecting two points of land separated by water, the bridge itself also offers a generous new public space in the city.

Vincent Feltesse, president of the Urban Community of Bordeaux: “It is an extraordinary architectural gesture. More than a bridge, it is an urban planning intervention in the heart of the Euratlantique project.”

Its considerable 44m by 545m expanse, a continuous surface stretching well beyond the banks of the river, seamlessly connects to the land. The gently sloping surface enables a pedestrian promenade while still allowing the necessary clearance for boats beneath. All traffic modes – including private cars, public transport, bicycles and foot traffic – are accommodated by its width, with the largest allowance devoted to pedestrians.

Clément Blanchet, director of OMA France: “The bridge itself is not the ‘event’ in the city, but a platform that can accommodate events of the city. We wanted to provide the simplest expression – the least technical, least lyrical, but the most concise and effective structural solution.”

The project was developed in collaboration with engineers WSP, the landscape architect Michel Desvigne, the consultant EGIS, and the light design agency Lumières Studio. 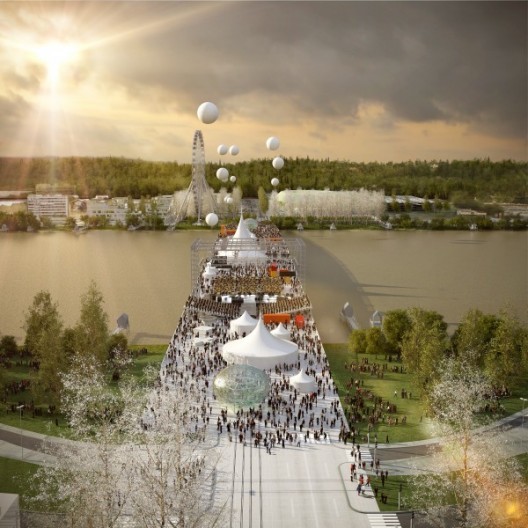