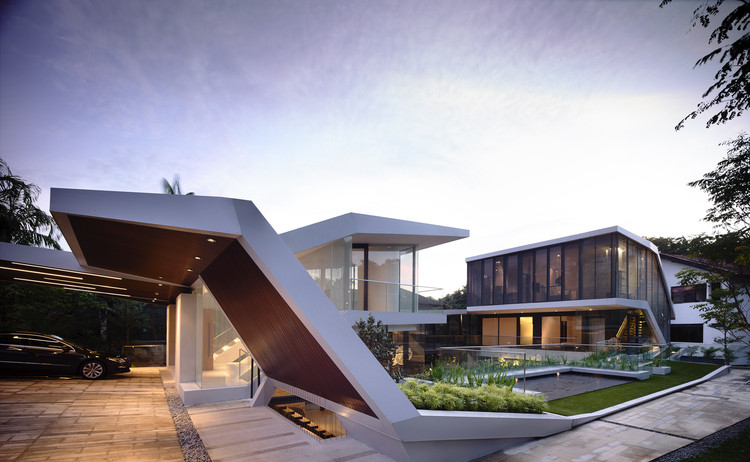 Text description provided by the architects. Situated in the well-known Caldecott region of central Singapore, this bungalow by A D Lab enjoys the relaxed atmosphere of its quaint residential neighbourhood with gorgeous views of the MacRitchie Reservoir, one of the nation’s most popular nature reserves.  The architects, however, had to contend with the site's proximity to a busy highway, that although is not visible from the site, creates a significant amount of noise.  The undulating terrain of the neighbourhood is quite unusual in Singapore, and creates a streetscape whereby the plots of land are about a storey below the street level.  As such, each house along the street is entered from the second storey level.  The architects took advantage of this unusual situation to lower most of the communal facilities down into a sunken court that shields them from the noise of the highway, as well as heightens the level of privacy and intimacy of the house.

From the external entrance of the house, the architectural expression is very understated.  The architects kept the built form above street level as ground-hugging as possible by making the roofs appear as folds and peels in the landscape.  This understated expression is further assisted by the folding of the roof downward toward the outer edges of the house.  The internal spatial expression of this tilting roof form gives the opposite experience, whereby the entrance to the spaces are low and rise upward from the entry, creating the sensation of an enlarging, grand internal room that simultaneously leads the eyes upward to the sky, as well as downward to the intimate central courtyard below.  The undulating and folding roof form is covered in turf, further defining it as a continuation of the surrounding green landscape.  At certain locations, the roof folds up from the earth level to allow wind and light into the sunken courtyard.

In another move to increase privacy, A D Lab encircles the main rooms at all levels with circulation space that acts as noise buffers.  The corridors and staircases wrap around the outer perimeter of the house, focusing the view from the rooms towards the central courtyard, as well as creating a sense of drama about the movement of a person through the house.  The “viewer” moves through the house via these corridors that are at times hidden hallways behind the rooms and at other times open out to theatrical balcony-like spaces that view down to the garden and main living spaces.

The owner lives in this house with his parents, so this network of hidden and detached corridors  allows the inhabitants the flexibility of moving around the house either subtly or in full view depending on the varying social situation and need for privacy.  The central courtyard is a private and serene oasis.  A luxurious swimming pool cools the courtyard along with a series of indoor and outdoor water features that separate the main public rooms from each other and bring the pool element into the house itself.