The Salem Harbor Station, built between 1948 and 1951, is a coal fired power station which occupies a 65-acre site in Salem, Massachusetts. One of the region’s dirtiest coal- and oil-burning power generators, the 748 megawatt station sits within the historical maritime hub of Salem’s waterfront. The facility is topped by three towering smokestacks that pierce the skyline, and can be seen from many parts of Salem as well as the neighboring communities of Beverly and Marblehead.

Learn more about the station's transformation after the break...

Effectively powering 745,000 homes at its peak productivity, the plant was long targeted as a polluter by environmentalists and is included in Massachusetts’ so-called “Filthy Five.” Upgrades and retrofits to improve emissions were prohibitively expensive for the plant’s operator, and as a result it was ordered to shut down by 2014 for violations of the Clean Air Act.

Footprint Power, a start-up power company dedicated to sustainable solutions, seized the opportunity to purchase the aging coal-fired power plant. Their intention is to redevelop the site by demolishing the existing facility and constructing a new cleaner, gas-fired combined cycle facility on a small portion of the existing site, allowing for mixed and industrial uses in the remaining area.

The new state-of-the-art plant is slated to provide 630 MW of power and be in full operation by 2016. It will not only reduce carbon emissions, but its “Quick Start” capability can help develop new renewable sources of energy, such as wind and solar power, which need readily available backup power to account for constantly changing weather conditions.

The design team was tasked with minimizing the visual impacts of the new plant and improving the appearance of the facility by designing the configuration, landscaping and cladding. The facility layout and massing reduces the visual impact by placing the facility in an optimal location and using the most compact footprint possible.

The creation of a continuous landscaped berm will not only reduce the overall visual height and decrease the amount of direct line-of-sight to the facility but will also mitigate any facility noises and provide a 7-acre public park to the community. Finally, the cladding of the facility was designed to be contextual to Salem as well as provide acoustic absorption. 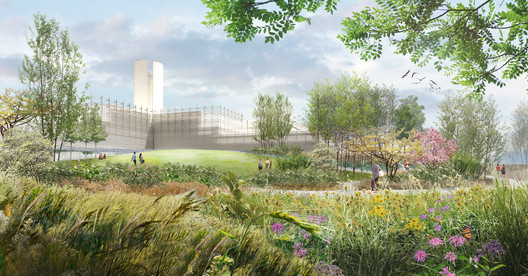