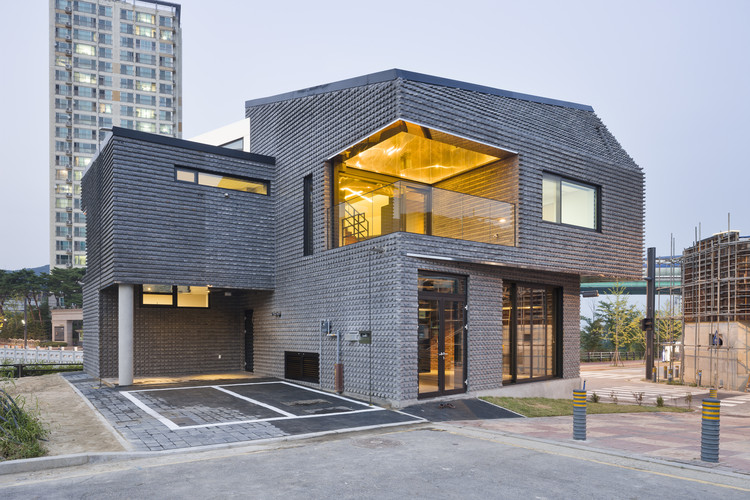 “The great view and the light” These two concepts should be compatible for a good house. However, Pangyo, the collective housing area, is composed only of functional logic to accommodate as many houses as it can.

It has a closed view being next to other buildings in the south, while facing the north from which Cheonggyesan is seen. Therefore, this project had its functional limitation that the houses couldn’t get the beautiful view in the north if the important rooms were arranged in the south for the natural sunlight. The project began with this incompatible situation which had to be resolved.

Optimal allocation of flat surface and lights from a high position. The Master Room and Living Room were allocated in north to capture the beautiful scenery. In this case, the plan design has a weakness that the natural lights do not come into the rooms. To solve the problem, it was designed to have a difference of height, with the roof divided into four parts, so that the light could come into the rooms.

The height of the roof was different, so the lights came in from various angles from the east, south, and the west. It became possible to feel the seasonal changes inside the building thanks to the natural lights coming from the windows. This is the optical space organization that can overcome the physical weakness of the north side and get the maximal sun lights. Moreover, the automatic upper windows discharged the heat inside to outside in summer, making the cross ventilation possible with the windows and doors in the south and north. This project design was based on the natural convection current to make an eco-friendly and heat-effective space.

Basalt, the nature of materials. The brick architecture is produced by each brick as one pixel, it reveals the nature of materials as well as a combined shape. In particular, basalt is different from the general bricks, because people process the gemstone in the shape of a brick. Therefore, basalt brick can keep its essential meaning of basalt gemstone. This project is focusing on contracting the features of basalt including its rough pores and its surface that is different from a fired brick

The recomposition of materials- Cold, warm and neutral matter properties. The architectural form consists of basalt bricks, general brick, and stainless steel. As well as general brick, about 20,000 basalt bricks, which are the main material to compose the rough surface, are divided into two parts according to their angles and recomposed on the architectural form. The basalt bricks are allocated horizontally in five parts ranging from 5 degrees to 45 degrees. In addition, it is divided into the embossed and the engraved parts vertically.

The 2-parted basalt bricks are recomposed with the general bricks and changes both the vertical and horizontal form with the embossed and engraved parts. The changes are caused from the features of the bricks as the material presents the changes of strata in contrast. The rough pores of the basalt gives us an essential message of the materials inside the recomposed surface. The bricks are revealing their existence by the recomposed forms with the embossing and engraving that changes the angles of the light. The materials are recomposed and the image is re-structured.