Planned to transform former gas station site at the entrance of SOHO by mid-2015, this COOKFOX-design was labeled as one of the most “erudite and captivating” presentations the Landmarks Preservation Commission has seen in years. The seven-story office and retail building is centered around the idea of connecting users to nature. Softening the building’s modern steel and glass facade will be a cloak of lush balconies topped with prime penthouse office space.

As described by the architects, “300 Lafayette Street is an unusual void, a fragment of space left over from the confluence of Lafayette and Houston Streets. This prominent, if disjointed, intersection is the result of past planning decisions that turned Houston Street into one of Manhattan’s major cross-town traffic arteries. As a consequence, the site has been under-utilized for many years, in spite of its high visibility to thousands of people each day.

“Since the 1930s the site has been in continuous use as a gas station. Its greatest value, however, has come in the form of advertising revenues generated by enormous billboards that target drivers on Houston Street. For pedestrians and the average New Yorker, the site has long had little to offer.

“Seen as a residual site between SoHo and NoHo, the corner has challenged each district’s integrity, both functionally and aesthetically. The opportunity to fill in this “missing tooth” is a rare chance to restore the overall cohesiveness of the neighborhoods. We believe a site as visible and prominent as 300 Lafayette Street deserves to be transformed into a bold new statement about the city and its future.” 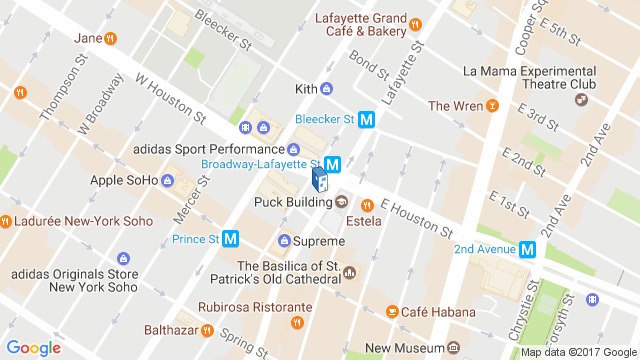