In honor of Alabama’s 50th Anniversary of the Birmingham Civil Rights Campaign, a national design competition was launched to envision a “Monument to Foot Soldiers.” New York City-based Jaklitsch / Gardner Architects was one of many entrants who responded, hoping to design a monument that would honor the sacrifices made by the unnamed activists who fought for civil rights and celebrate the power of the human spirit.

From the architect: Our Monument stands for each foot soldier- not honored individually but instead for thousands of courageous individual acts of resistance. We honor them for their defiance in the face of brutality and cast aspersions.

Our text, which wraps the ring of the Monument, is about the sound of change and a commemoration gathered from the songs of freedom-these collective hymns turned resistance songs. These songs strengthened the resolve of those ordinary men, women and children to stand together. We offer these words that they might stiffen our resolve- “We shall not be moved” and I “ain’t gonna let nobody turn me round” because you “will keep your eyes on the prize and hold on.”

The Monument is rung with the full verses and our gaze is skyward, while being wrapped in the material surround. The quilts of Gee’s Bend, Alabama, were an inspiration for the possibilities of a three dimensional & formal representation of an African-American material culture. The design hopes to capture a moment in time- 1963, but also to speak to 2013, 2063 and beyond.

The Monument would be a tribute in stainless steel. A Spatial structure in varied finishes- infilled with three kinds of glass with differing textures and opacity. The glass would sparkle and reflect the light during the day, and refract the light at night, shining like a lantern. The pavers and center pedestal would be a regional stone. The design team chose these materials to celebrate the local industry and craft of Birmingham. 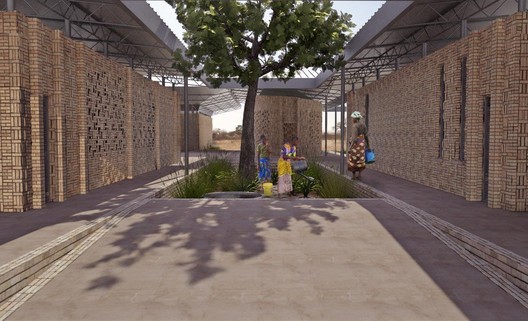