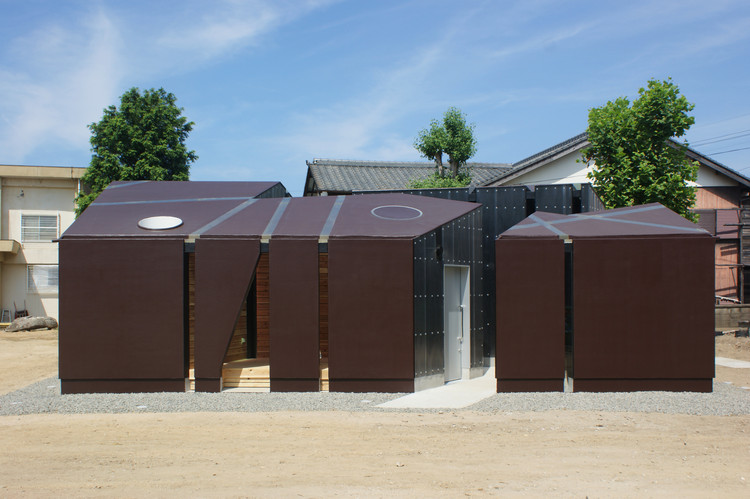 In the Edo period however, Ibukijima island was a place where the line of connection with the capital and the upper fashion came immediately, and, as a vestige of that period, the capital dialect of the old time remains, and it was once the independent centre of Setouchi Inland Sea. House of Toilet tends to change the peripheral space of the center of Ibukijima Island, giving an intensity to Ibukijima Island that is the periphery. Likewise, when the toilet is removed from the main core of the house, it becomes another core on its own.

There are several layers whereby we overlaid the time and light patterns of Lbukijima Island and the rest of the world. According to the solar orientation at 9:00 a.m on the day when three traditional ceremonies are held and the day of the summer solstice and the winter solstice, the slits of the natural light pass in the architecture. When the ray of sunlight passes in the house at 9:00 a.m once per year, the season of the area is highlighted, thus further clarifying the identity of Ibukijima island.

The lines of the natural light which direct towards the major cities of 6 continents (Tokyo, London, Nairobi, New York, San Paulo, Sydney) by the shortest distance from Ibukijima island is evident in the architecture as a consideration that Ibukijima island regains it's fomer self-respect and consciousness of its relation with the world.

This international concept is added to the identity of Ibukijima Island, and the direction of the natural light of 2:00 PM would coincide with the direction of New York and they aware that the internationality exists along the extension of the locality.In addition, the place where the axis of these six angles crosses is the coordinate points that indicate the position of Ibukijima island, thus, the relation with the world is also the locality itself.

Relation with the landscape of Ibukijima island

The exterior appearance resembles the ordinary local house of this island. I didn't design it with the form where the contemporary architecture abruptly appeared. It was a consideration to the landscape of the island where the traditional context remains.