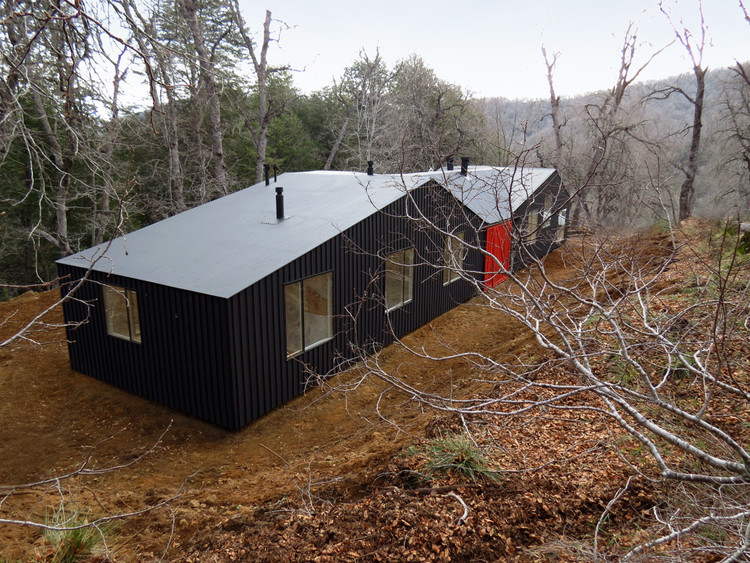 Text description provided by the architects. The commission consisted of the construction of a shelter for a family that will house two large areas. In the first, the space around the fire and the kitchen to be constituted as a module without divisions, with the fireplace, wood stove and a play room. And in the second, a module for the bedrooms and bathrooms.

From the commission, the project proposed the following set of rules:

The project is located in the forests of the Andes, in a place called "El Buchen", in the region of Maule, Chile. It is a place of ancient trees and difficult access.

The project is located in a forest clearing in order to avoid interfering with existing trees, an element that defines the length, width and height of the volume.

From the commission of building a shed arises the problem of how to inhabit it, understanding that it is a single undivided space. We propose the construction of spaces differentiated by lower volumes containing the various program requirements, which in turn are able to differentiate the temperatures necessary to inhabit them, obtaining different areas that are climatically controlled.

This led to three types of spaces

Vestibule space, mediating between interior / exterior. It can be used as a terrace in the summer, opening its doors and allowing cross ventilation. It can also be used as a hall in winter, behaving as the first barrier of climate control.

Common area, living / dining / kitchen, which takes advantage of the full height of the building, establishing itself as a mid temperature space.

Private space, bedrooms and bathrooms. With low ceilings and openings controlled by their orientation, in order to achieve thermal comfort.

The study of forms arose from the observation of wood sheds in the area, which yielded as a result the following set of rules:

The idea of ​​working with closed volumes, without eaves and with controlled openings, wherein the roof is constructed first to protect from the weather, and then the interiors are built.

One form within another. As a result of building the roof as the first action, the idea arose of ​​organizing the program through smaller volumes within the overall volume. For this, we chose to build two smaller sheds inside the larger one, which grouped the bedrooms on one hand and the bathrooms on the other. These differ in color and materiality from the rest of the construction.