Slash with Phillips/Pilkington Architects have been announced as the winners of the Royal Adelaide Hospital Site International Design Competition, which was open to registered architects and landscape architects from around the world. The competition centred around redesigning the current hospital site, which will be vacated in 2016, in order to create an iconic place within the Greater Riverbank Precinct of Adelaide. See the winning and shortlisted proposals after the break. 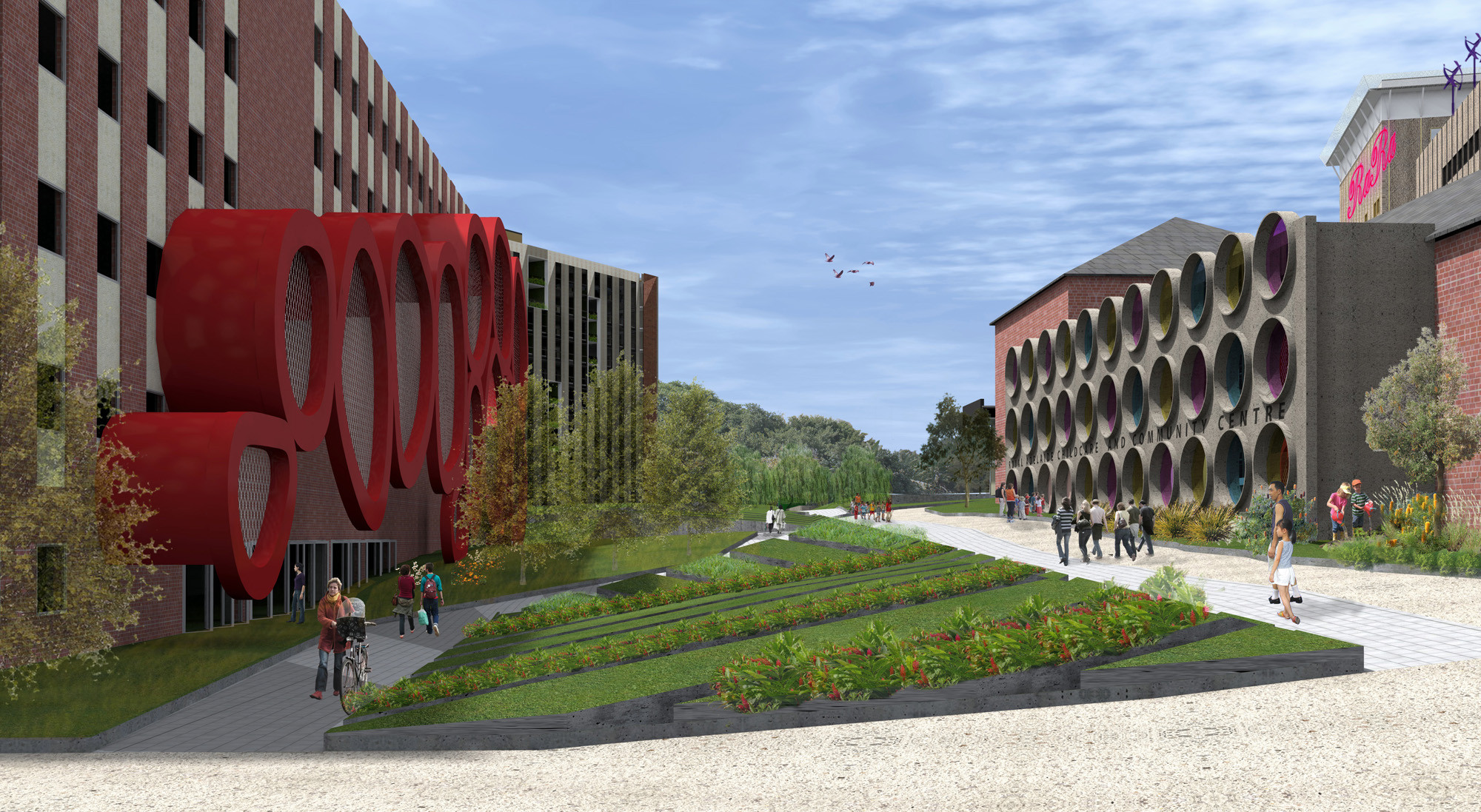 Shelley Penn, chair of the jury, said that "the jury was pleased to see that the stage two competitors had largely built on the strength of their stage one submissions" and were "impressed by the depth and breadth of research SLASH and Phillips/Pilkington Architects took into the social and physical history and condition of the RAH site". "It offers a vision for an evolving, dynamic civic place and it offers a high degree of economic viability" with the "mix of uses for the site proposed by the winner was strongly supported by the jury."

According to the Government of South Australia the poll for the People's Choice Award garnered "more than 16,000 website visits and 4293 votes [were] lodged". Nice Architects (Slovakia) and Mulloway Studios' design claiming the prize.

"We seek to re-imagine the site without starting again, to build on its history as a place for medicine, healing and learning. Successful ecosystems rely on diversity. This proposal is diverse at all levels – the programmatic, architectural, cultural, economic and landscape. The proposal makes a proposition of retention and therefore reduces energy that would be required in new building construction. The primacy of adaptive re-use is supported by several key initiatives including on-site waste treatment, water retention and on-site power generation that can be extended to service beyond the site."

Adelaide Rocks "is a new urban quarter. It is an engaging, unexpected, fun, active and multi-layered place built around sound ecological principles and economic sustainability. A green and vertical landscape that connects the city to the parklands, the hill provides active and passive recreational opportunities not readily available within Adelaide’s CBD. A hill formed from the debris of demolished buildings that turns waste into a positive, exciting, and unique urban space. The proposed building is seen as an iconic entry element into the city. It provides a bookend to the development along North Terrace and contributes to the broader city development patterns."

ORAH Forum: "following in the footsteps of the surrounding Park Lands and the hospital as communal institutes, the ORAH Forum will be the urban place to be for everybody. ORAH becomes OpenRAH, the open system. The site is declared an urban forum, moulded by the given built fabric and new interventions, and made permeable by covered and outdoor public places. The site will remain over a given time-frame, in a state of ‘incompleteness’."

"Adelaide is partly defined by its abundance of parkland. Rather than add to this, we have viewed the RAH site as an opportunity to provide a vibrant urban precinct for the city. The proposal seeks to reconcile the multiple forces at play on the site through a richly layered and non-singular approach. The site will develop an identity as a cultural, arts and education precinct. The proposal is framed by a set of ‘rules for development’ that dictate important constraints that control the scale, extent and nature of development, however allow sufficient flexibility such that the development may be staged incrementally and procured in separate parcels in association with various private interests."

City + Park: "above all, the site will speak of Adelaide, the city rich in arts, music, education and innovation. The Heritage Plaza will be sited at the North Terrace level, functioning as a canvas for public events, street artists and passive relaxation as well as a means to allow the heritage buildings to breathe. These historic buildings will be re-energised, reverting to an open, permeable civic and landscape setting that not only celebrates the history of the site and the individual buildings, but provides a welcoming entry to this re-generated cultural precinct. Student housing, laneway bars, restaurants, a fresh food market and a bicycle exchange hub will meet everyday desires."

Adelaide Forest: "Gather, think, exercise, play and rest. The forest is the new lungs of the City of Adelaide. A new forest economy born from the inspiration of an old forest economy. The forest: a quiet place dedicated to the Kaurna people who once occupied these lands. An opportunity to gain more public spaces and in this way admire a taste of the old architecture of the site. It will be a 'Forest for the Future', a drought proof, climate proof activity generator in the heart of the city and in the heart of a newly visioned precinct. The proposed building program is a great opportunity to enhance the vibrancy of Adelaide. It’s a connection to dispersed community. A large flexible space for all exhibitions adjacent a large plaza for events, not cluttered. Later a night market will transform the bold and open into busy and intimate."

The jury was comprised of: