Save
House on a Stream / Architecture BRIO 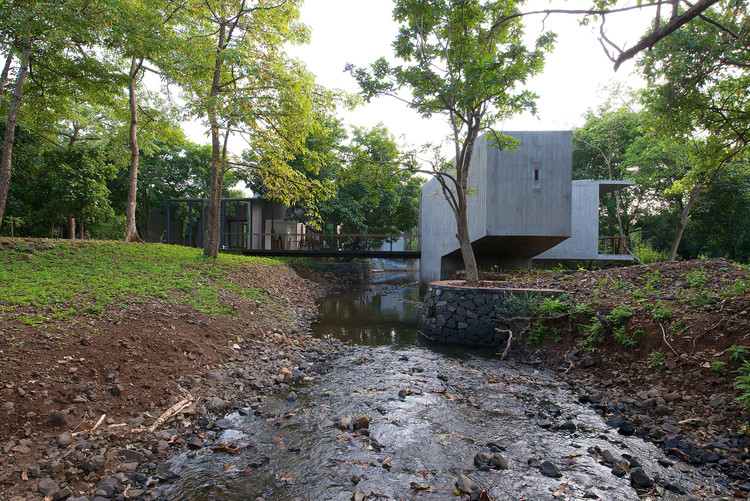 Text description provided by the architects. With a stream running through the house, this retreat in Alibag is delicately woven into the landscape, alternately opening up and closing itself to the different characteristics of the site. A multitude of medicinal and fruit-bearing trees provide for an intimate ambiance and comfortable microclimate. Though seasonal, the streambed allows for an interesting landscape feature throughout the year. The house is placed on the banks of the stream where it makes a sudden S-curve. A short walk along the stream before entering the house builds up an element of anticipation. Like an organism trying to make the most use of its resources and surroundings, the house with its several limbs reaches out into the landscape making full use of the views within the site and dramatizes special moments: a beautiful tree, a view of the mountains beyond or the cascading stream during the monsoon rains. What started out as a Cartesian response to the site became deformed, stretched and pushed in.

The house consists of two parts: the day areas of the house such as the dining/kitchen, the living room, and entrance verandah are separated from the master bedroom by a bridge that spans across the stream. Since the owners are passionate about cooking, the kitchen is made the heart and center of the house, a large, inviting volume with a high ceiling and a skylight that floods the space with light. This space forms the anchor of the house from where its various limbs branch out into the landscape around existing components of the site. The living room on the left is lifted off the ground to have a panoramic view of the mountain range in the distance. The guest room embraces an existing tree to create a courtyard and just peeks across the dining room to have a view over the length of the stream. The pool is aligned along the stream acting as a celebration of it during the monsoons, and a memory of it during the dry season.

The orientation of the program is based on climatic considerations. The bedrooms are mostly west facing with large verandahs and get the evening sun. The living rooms face east once again with a large verandah. The kitchen, dining, and pool areas all look towards the north and are shaded by large trees. The south façade of the house is predominately closed and more solid with the exception of a picture window that frames the view out from the pantry to the fields beyond.

While the external structural concrete shell contracts and expands in the plan in the section it does so as well. The external form of the house responds to the site and its orientation and flows from high to low in accordance with the monolithic fluidity of its form. Internally, however, it responds to the creation of space and directs the eye to frame a particular view. The outside and inside are therefore apart and internal spaces are defined with volumes created by the changing thickness of the internal ceiling. The heaviness of this mass, however, is reversed by the lightness of the whitewashed walls and ceilings. A central skylight and large sliding doors, which span from floor to ceiling and wall to wall bring in the outside into the interiors. The cantilevered ‘limbs’ of the living room and two bedrooms defy the heaviness of the concrete volumes. By not resting it on the ground the relationship with the landscape paradoxically is strengthened.

A series of a-symmetrical axis create a path of discovery through the house. The arrival path is aligned with the axis of the pergola, which embracing the pool enters the dining room on the left side. One corner of the dining room overlaps with the conically shaped volume of the kitchen. By shifting the axis of the dining room off the axis of the kitchen and raising the level of the living room, this becomes a more secluded space. Furthermore, it allows a glazed door in the kitchen to open up to the outside and view along the external living room wall. At strategic positions in the house steel framed box windows protrude through the concrete walls. Placed symmetrically on the interior walls they highlight specific elements of the site, such as the bark of a tree, or peek from the master pavilion to the main house.

The house is cast in plank-finished concrete with a vertical grain. The homogenous materialization emphasizes the sculptural quality of the house that is molding itself about the site. Concrete being left exposed in the humid Indian climate attracts a patina that becomes more rich and alive over time. More so the grey textured surface provides a muted surface against the vibrant green surrounding. Elegant timber screens further soften the greyness of the concrete. They not only form a buffer between the interior space and the exteriors but also create an intensive play of shadow and light on the floors and walls. 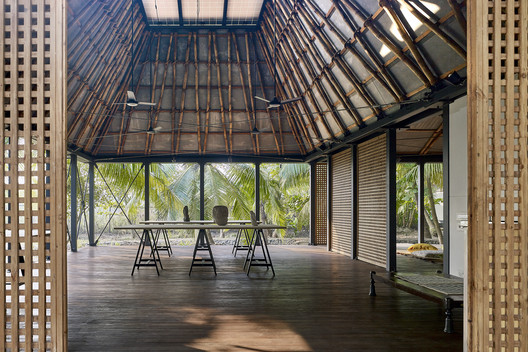 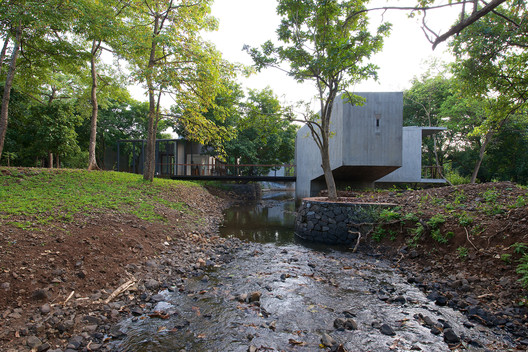