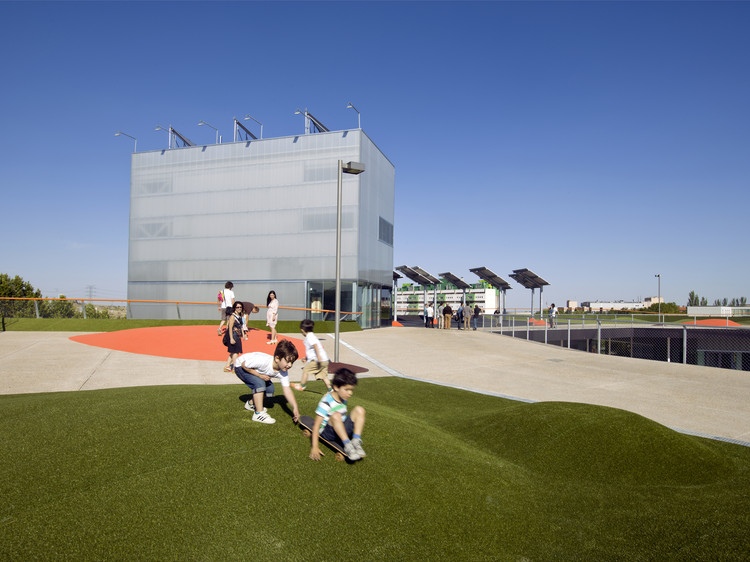 Text description provided by the architects. The city where we build this Plaza Mayor has got a specific surname, is a University City. The University has grown around a meeting and circulation central space, a green boulevard which has become the central structure of the university. At one of its ends the recent commuter station is located which connects us to the city center (Puerta del SOl) and at its other extreme, the Plaza Mayor.

The PlazaMayor is the new Service Center of the university; it should express its symbolic and symbolic nature, serving as a reference into the structure of the campus.  By relying on the level-deference in the site and the potential of the green boulevard which form the access to the history faculties, we build a folded platform. The boulevard extends through a gardened path, turning around a square.

Above the natural ground level, under the slope, the parking is implanted, reducing to minimum the excavation volume and facilitating also its natural ventilation through the existing perimetric vegetated embankments. By respecting these ''natural buffers'' and above the ground level, we build two intermediate platforms  where programs grouping and a variety of pedestrian access at the street level are produced.

The communication towers are elevated and function as urban milestones inside the ensemble, creating a perimetric inflection point which announce the 7 bridges: towers and bridges are entrances, connections and occasioned which incite discovering the empty inside: The Plaza Mayor. Within and around it, the big cantilevers create covered paths which increase the space versatility, protecting it from sun and rain.

The Platforms, are the infrastructures waiting to incorporate a program.  The structural solution facilitates the coexistence of a irregular and revenue geometry different in each level, the distinct programmatic uses initially required and the movement continuity between all them.The structural solution for this complicated problem is simple: a basic reticula system of bearing pillars and post-tensioned concrete slabs. The 5x5 m reticula seemed the most efficient and the one which could adopt itself the best to the singularities of different platforms, from the ground level with functional distribution on the parking spaces, till the superior levels, more free permitting us to reduce the pillar presence and adopt till 12m lights or 5m long cantilevers, to compensate the efforts and to vary its diameters.

The natural landscape prolongation which identifies the University Campus, is achieved through the last platform-covering. The Cover its already not what it usually is. It adopts a new moor urban character, artificial and equipped. The situations and relations which occur in the campus boulevard are reinterpreted and transformed, proposing now, new opportunity and interchange areas for students, professors and visitors, providing it with new supports and installations for the space to be lived, valued and used in a continuous form.

The material above the new path will be adopted to the new topographic configuring dunes, folds, beaches or cuts; wit diverse textures, soft, rough, furry and accented colors, green, orange, black or sandy, with illumination lines, elevated crosier connected to the solar clocks, terraces and kiosks. And like the looseness of the first sketch, an orange line is designed with its nonlinear geometry dematerializes the edge, converting it in a connection line between the campus landscape and the far away presence of the Madrid Sierra. 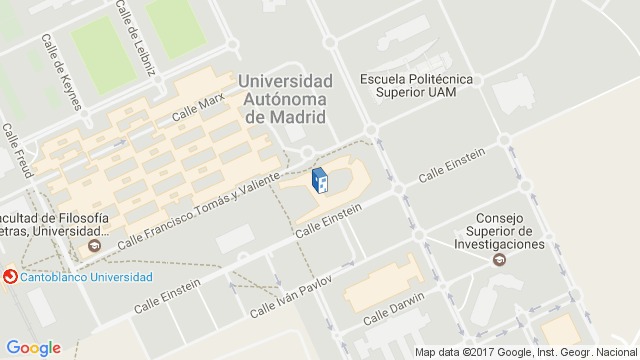