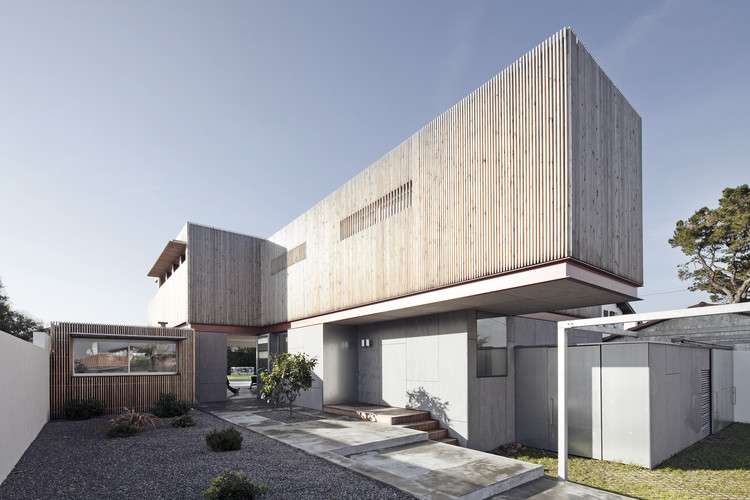 House « R » is situated in Anglet, France on a site approximately 1000 sqm big. The relatively narrow and perfectly rectangular plot of land dedicated for the building (50 m long by 20 m wide) gave the existing ground a strip-like quality that contributed to feed the project.

The north-south orientation of the piece of land, the course of sun, and the pre-existing positioning of neighboring houses have also been important issues for the project conception development.

The house is set back from the street, clearing a space allowing for the parking of 3 cars. This set back is also a voluntary act of positioning the house as a clearly visible “sculptural” presence towards the public area, as opposed to the usual layout of constructions or hedges aligned on the street limit thus providing a “closed” territory. Generosity in public/private “frontier” treatment has been looked after.

The house is developed on two levels, 3 bedrooms and a playground area on the 1st floor, 1 secondary bedroom, office space and main living space on the ground floor. The different volumes composing the project have been assembled according to rationalized modules of 3 m wide parallelepipedic strips, sliding one against each others, and creating cantilevering zones for terraces, balconies and canopies.