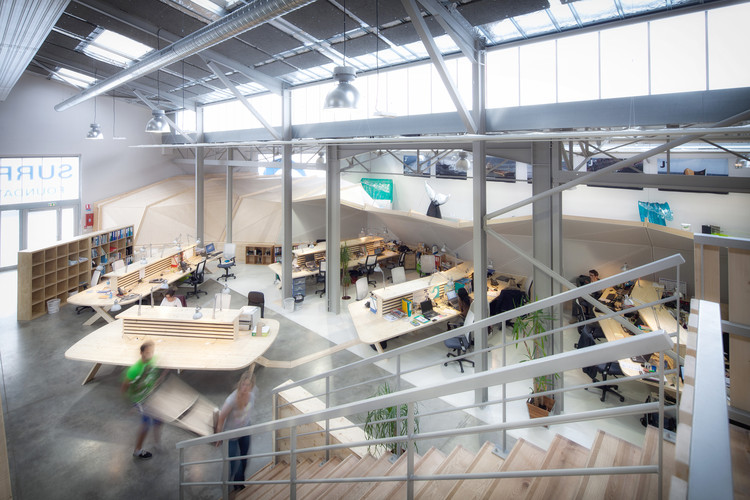 Text description provided by the architects. The project for SURFRIDER FOUNDATION EUROPE headquarters is housed in two pre-existing industrial sheds. Existing volumes have been completely emptied and uncluttered, the skin envelopes isolated to meet the new 2012 thermal regulation and the existing roofs containing asbestos replaced by new steel sandwich panels integrating zenithal lightning as well as all the new technical fluids equipment.

The floor, entirely freed on an overall surface of 1000 sqm can thus accommodate, under a single unifying roof, the two programmatic entities forming the new space: a free area destined for educational exhibitions purposes and a zone of tertiary activities for approximately 60 workers (open space, boxes, meeting rooms, cafeteria...)

The two different programs develop on each side of a gigantic wooden wave-like partition wall. This technical element is made from a highly performing layering of sandwich composite wood panels habitually used in transportation construction (boats and trains construction industry) and allowing for a maximum treatment in term of acoustical issues (insulation + absorption). The "wave" separates the volume in two parts and act as a real soundproof screen, thus permitting two distinctive programs to cohabit in a same generic and unifying space.

The sound coming from the noisy exhibition area (young kids classrooms are common visitors) bumps and slides on the outside “reverberant” birch surface of the wave, being projected further up towards the under face of the existing sheds roofs which are acoustically treated for absorption. The under face of the waves, beneath which long table elements are plugged, is entirely treated as a sound “absorbing” surface, thus providing a particularly comfortable zone for working.

By “slicing” the existing volume in two different parts, using a long furniture element clearly identifiable as a “WAVE”, SURFRIDER FOUNDATION users can thus refer to a strong identity-maker element whose technical capacities also permits to profit from the generous pre-existing volume rather than clearly separate it into two different isolated entities. 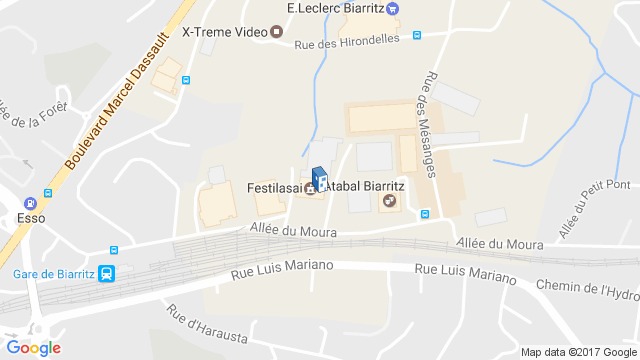 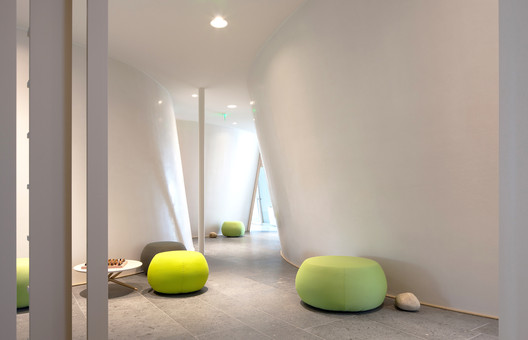