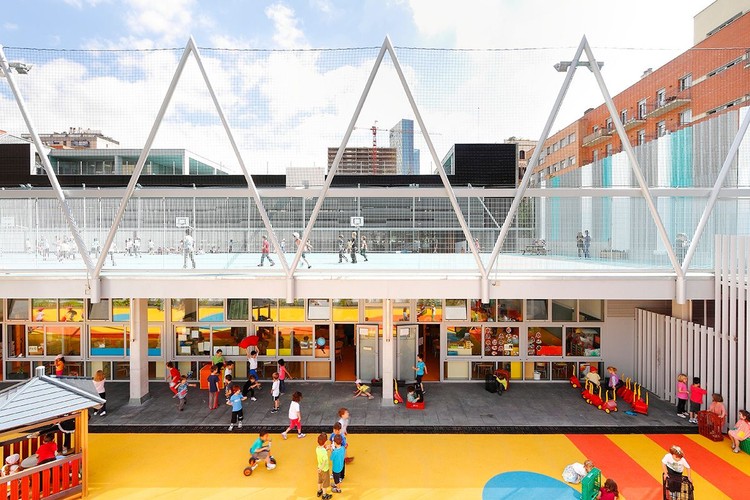 Text description provided by the architects. St Martí's Primary School forms part of a Multi-facility Municipal Building with an Adult Education Centre and a two storey underground public car-park, in the neighbourhood of Poblenou in Barcelona The car-park’s structural grid outlines the buildings above.

How could we re-think the school starting from the urbanity of its location? Nowadays, the regulations and the guidelines that guide the development of this type of facility buildings are indifferent to their surroundings. The requeriments of outdoor and indoor spaces are the same for a school in a rural environment as for one in a dense urban surroundings. These poorly considered requeriments result in a very extensive, wide and open schools in rural and on the other hand, in schools too compact and indifferent to the city-scape of the urban environments.

Since the beginning of the SantMarti School project, we’ve had the purpose of creating an airey and spacious school, open and sensitive to the surroundings, but predominantly urban. The building is situated in highly dense surroundings where Cerdà's Eixample merges with the Poblenou industrial layout. The dense and complex program (indoor and outdoor), the dimension of the plot, the rigid urban planning rules and the unmodifiable underground position of the car-park, forced a re-think of the standard directives of public schools and how to adapt St.Marti’s to this specific location. The bulk program of the school is located on the ground floor and all the rooves become school’s playgrounds. The proposal alternates with equal importance the voids and constructed areas. Consequently, better use of natural light, ventilation and views over the inner school spaces are made possible.

The construction of two basement floors, dedicated to a public underground car-park, allow us to think of the school as a very big roof, and rethink this as the playground areas of the school. Taking this decision generates a variety of outdoor spaces, such as: patios on street level, porches (transition spaces) connected to these courtyards, vast open spaces on the first floor and a space for an urban allotments on the top terrace of the main building. All these outdoor spaces organise the indoor spaces according to the visual and physical relation with them.

Together with this sequence of outdoor spaces, the materiality of façades, built differently depending on their situation, the courtyard façades and street facing façades, create the external image of the School.

The side street façades are put together in a very heavy and tectonic way, with textured concrete walls and a perforated steel enclosure, forming an abstract pattern. These façades are aparently the most heavy and closed ones, but at the same time are the facades that allow the straight visual relation in-between the street and the courtyards. In contrast, the rest of the facades are built with an industrialized, dry mounting and fast execution system. These Ventilated type façades have undisputed advantages of heat insulation and soundproofing because air flows in the intermediate cavity.

The constructive solution for the different rooves is sensitive to their importance in the building (by use and extensión). The Ventilated roof surface, which is walkable on, is perfectly adapted to the Mediterranean climate.

The construction of these type of façades and roofs, the sunscreen protection to the south and the connection to a District Heating and Cooling Urban System (Districlima) build an urban school with the Highest Energy Certification Class (A).

The exterior of the school is intentionally plain and somber, in contrast to the inmediate environmental heterogeneity, whereas the school’s interior life is a vibrant mix of colour and freshness. 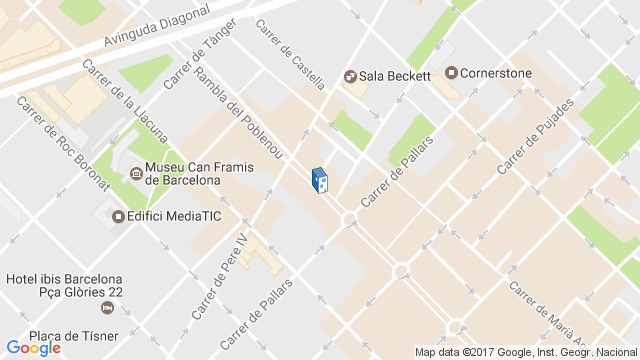