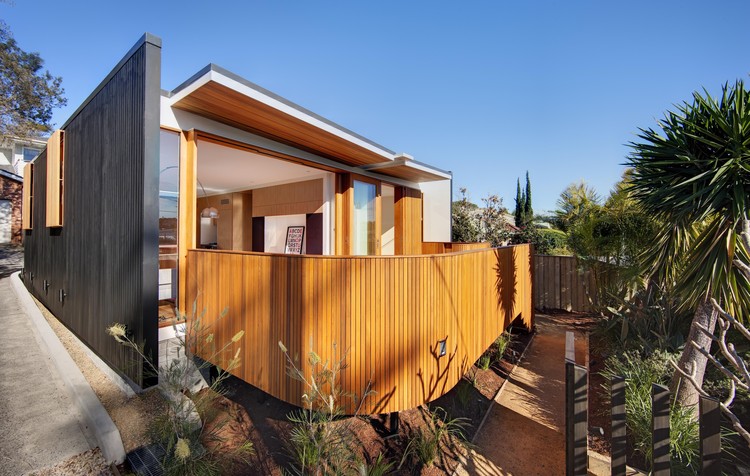 Text description provided by the architects. The Curl Curl House was an exercise in material, time, and cost efficiency. A specific project brief included two bedrooms with built-in robes, bathroom/laundry, an open plan dining, kitchen, living space, and a deck. The Client also required that the home was to be at one level extending from the carport and main entrance.

A shared driveway, a services easement, and a compact site influenced the form of the building envelope and allowed for the internal floor area to be maximised without sacrificing external amenity; at just under 100m² every aspect of the design has been carefully considered. The main challenge that arose from the curved form of the building was negotiating the circumference of the narrow driveway. In order to achieve the curve, plywood top and bottom plates were employed in conjunction with tightly spaced studs. The successful negotiation of this site constraint is the dark cedar curve leading to the main entrance of the dwelling.

With the existing shared driveway running past the living areas along the Eastern façade of the dwelling, visual privacy was also an important issue that needed to be addressed. Window openings along this façade were minimised, and the openings that were created had cedar screens placed over them to prevent passers-by from looking into the living areas. These screens were given a natural oil finish and create modulation in the facade by breaking up the black cedar cladding with a warmer element; they can also be easily removed for maintenance.

To compensate for having minimal openings along this façade, a sinuous skylight runs the length of the Eastern wall, allowing light to penetrate the living areas. The Laminated Veneer Lumber (LVL) beams forming the roof structure for the dwelling intersect the skylight on a rigorous grid, and required precise alignment with studwork to the external wall. Through careful detailing and craftsmanship, what would ordinarily be a concealed structural element has been turned into a design feature.

The Client’s specific requirement for the dwelling to be at one level informed the decision to raise the building 600mm above street level, to match the level of the carport. As a result of raising the floor structure, a generous water storage system could be installed in the sub-floor space and clean unobstructed spans in the living and private areas could be achieved. A construction system of continuous span LVL was used for both the floor and roof structure, with the roof beams being supported by a central spine unit. This spine unit performs several functions; it supports the roof beams, provides rigidity to the building and houses the service core of the home, incorporating wet areas, Living Room joinery, wardrobe space and general storage. The spine also separates the public spaces to the East from the private spaces to the West.

With a land area of 259m², a modest budget and a construction program of 24 weeks, a streamlined and efficient approach was adopted with all aspects of the design and construction process. The end result is a highly-detailed and considered building that responded to the Client’s brief, budget, seasonal climatic conditions and spatial goals.