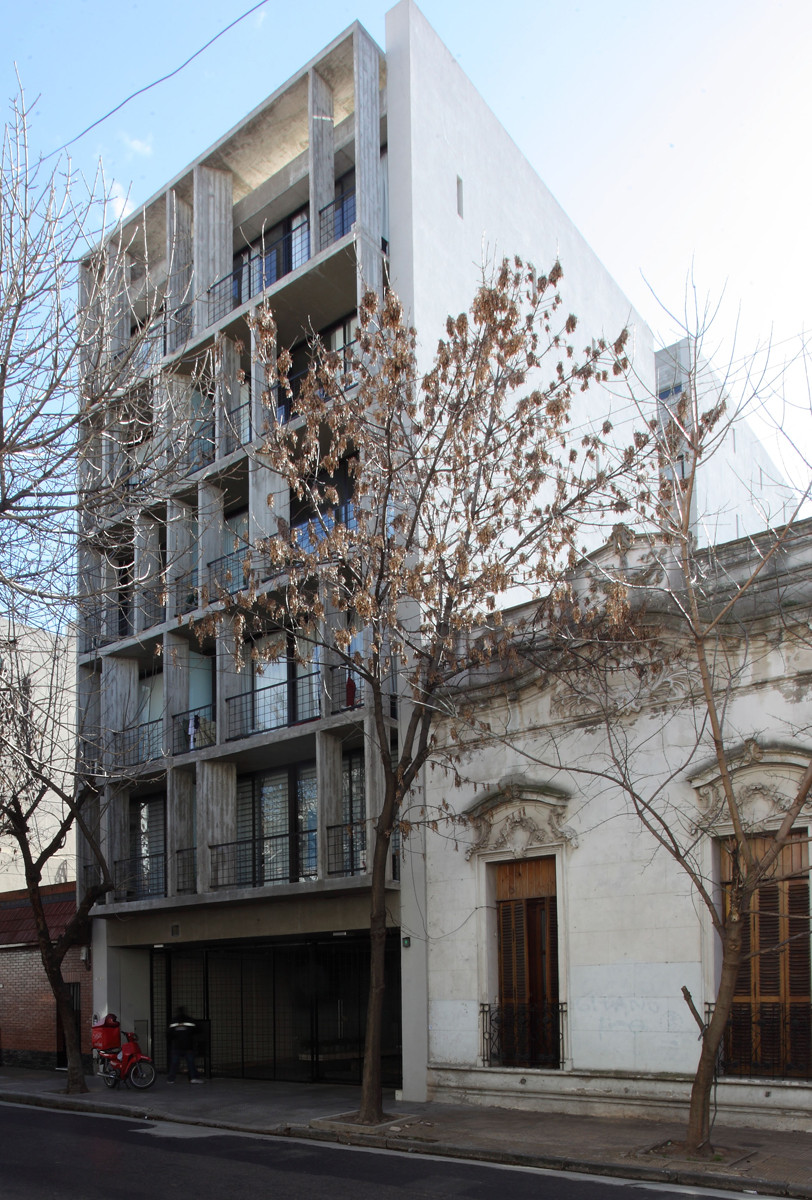 We were to build an apartment building in a typical lot 8.66m wide in Boedo, an area that without losing its neighborhood characteristics yet, is changing its appearance as a result of the urban densification produced in recent years in important areas of the city. The particularity of the site on which we were to intervene is that its rear boundary is adjacent to an urban courtyard with abundant trees, where there is a football school and a small square. The views to this green area match the best direction: north.

We thought that, expecting the changes that will occur in the short or medium term in the area, the building should be a piece devoid of adjectives, neutral enough in its form to live with what exists today and what can be built in the future. With a desire focused on its constructive expression and its production process. For that reason it seemed appropriate to propose a building with a façade devoid of accents or articulations, and if possible, be constructed with a single material. We also wanted to continue experimenting with exposed concrete, as we have done in summer houses in Mar Azul or permanent homes in the greater Buenos Aires. We did so because we assessed that this constructive aesthetic system with the necessary adaptations would address both the issue of a dominant material easy to assimilate to different environments, as well as the short construction times, low maintenance cost in the future, and a construction cost within the standard.

The main adaptation was leaving the concrete exposed only on the facades, the vertical core and a series of internal walls that serve the dual function as room dividers and load bearing structure. For the two party walls, it seemed logical to continue considering a traditional solution of concrete columns hidden in a double masonry wall. We also wanted, as in the Concrete House, to design the facades like an articulation between public and private space, with a series of vertical partitions that vary their position from floor to floor and allow for the location of openings for each room across the entire width and height available. The views toward the interior of the units that face the street are protected by these elements, and the ones overlooking the green area give the user an ever changing frame of the landscape as he moves within the apartment. Another goal we pursued was that the ground floor be free of program, on one hand to offer the public space air, light, and views of the rear garden, and on the other hand to avoid housing units be affected by their contact with the public level. Finally, we designed each apartment to feature the greatest possible flexibility of use with a generous expansion, yet protected by the walls that organize the facades.

The building has an open ground floor, 5 typical floors with four studio apartments each, and a sixth floor with a terrace and common use rooms, plus a one-bedroom dwelling unit.

On the typical floors, four mirrored units are accessed from the landing with views of the city and natural light, two at the front, linked at the bathrooms and kitchen, and two facing the back in the same situation. The exposed concrete walls that define such service spaces have, as we said, a structural function, and also define those environments that give more privacy to the main spaces of each housing unit. The creation of the two small courtyards in the center of the plan follows the purpose of providing all units with cross ventilation, and additional lighting in the widest area of the space.

The structural system of the typical plan is supported at the center, it required a transitional space to allow for an open ground floor plan with supports only at the party walls. It was designed with beams receiving the loads of the central system of partitions of the typical plan, which move them to the party wall axes. This beam system is enclosed in slabs which also allow for the diversion of facilities without requiring a reinforced ceiling which would introduce another material.

The party walls were plastered and painted with white latex on the inside, and with a plastic plaster on the outside. The floors are concrete screed panels divided by plates of aluminum. The meeting between the walls and the floor was designed with a recessed aluminum profile as a baseboard. The openings are anodized aluminum colored dark bronze. The heating and cooling system is designed with individual equipment for each dwelling unit.

From Mar Azul to Boedo

It was very interesting as an experience for our office to work on the adaptation of an aesthetic constructive system originated for a specific environment and program: summer houses in a maritime forest, a very different subject and environment. We assumed the challenge that the language we have developed in the houses could not withstand the change of scale, program and location in the urban fabric. The result confirms that a system of strategies for addressing projects, and aesthetic constructive solutions proposed a priori as a body of ideas, do not limit the possibilities of design for the various problems that may arise if the experimentation with each new project goes through the sieve of each circumstance. 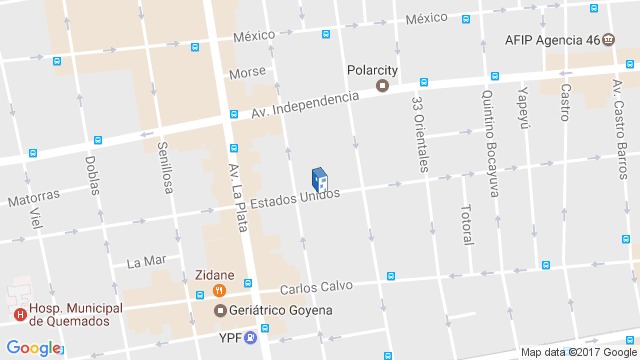 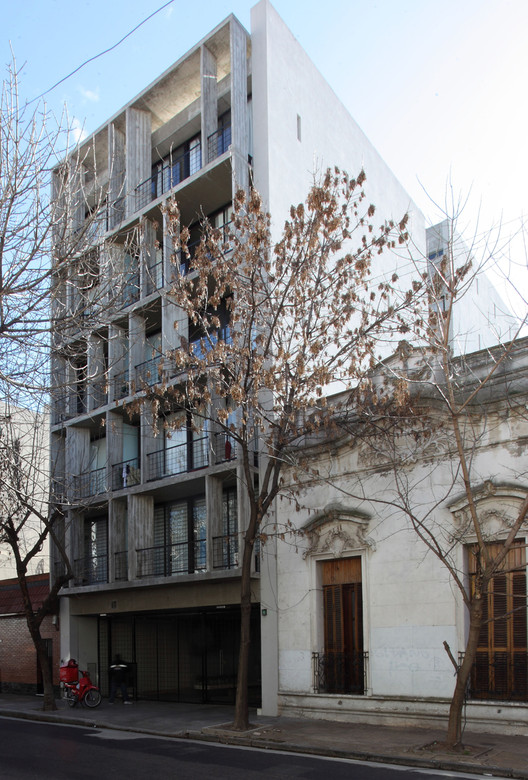