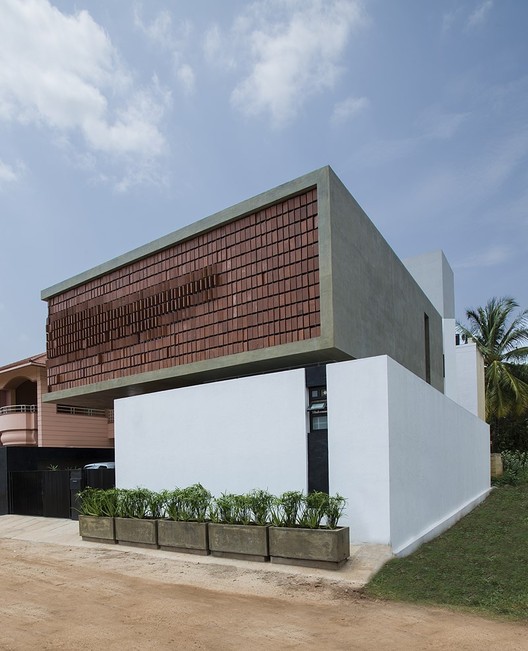 Text description provided by the architects. The site is a 2400 Sqft plot with access road in the north and is located in Gundlupet, a small town close to Mysore, Southern part of India. The surrounding rural landscape here is giving way to,enigmatic developments and placeless structures inspired by urban imagery. The process was to look at these conditions and evolve a form that maintains a sense of continuum with the idea of place without resorting to mimicking the old. The brief described a three bed room house which can accommodate 2 families and a social lifestyle.

The program when blocked occupies the entire lower level. Two volumes are subtracted from this and is moved to the upper level. One of the open space is seen as car port which is sheltered from the top by reclaiming the space at the upper level. The other is a open to sky court yard located towards the rear,this space is seen as an anchor around which the organization works. Morphologically speaking courtyard and open spaces continues to be relevant socially and climatically in our context. Our idea was to look at it not as a open residue as it happens in most of the 2400 sft plots but as a valuable space which enlivens the experience. Here the spaces recede from the street edge to orient the spaces towards the rear courtyard, which is seen as an extension to the other spaces at the lower level. This level houses the living room , dining,kitchen and the master bedroom . The master bedroom and the living both open out to the rear court. There is also the sheltered open space which is used as a parking space which doubles up as extension to the living room during social events. The living and dining spaces are double height volumes maintains links with the upper levels. The upper level houses two more bedrooms and a family . Here one of the rooms acts as multi-purpose space when the sliding door which forms one of its walls opens to combine with family. The strategically located double heights helps in focusing the experience towards the inferiority of the house. The movement through the house is orchestrated through subtle manipulation of levels which leads on to a sculptural staircase and then on to the first floor through the dining. The stair continues on to lead one on to the terrace which serves as a nice break out space and also as an effective utility space in context of Indian lifestyles .Here terrace is often used to dry food items, fly kites or even used as alternative sleeping spaces in summer.

The volumes are animated by light which is filtered through strategically located openings and shading devices which are created out of weatherproofing clay tiles engineered as baffles. They are used vertically and horizontally to form surfaces lending privacy while delivering filtered light,as a result the façade is about the textural surface highlighting the introverted nature of the house. This idea which is a result of orienting the spaces towards the interiors rather than the street or outside critically acknowledges changing structure of the town and the loss of vibrancy generated in the earlier tightly knit streets.

The structure is RCC frame with brick infill . Rainwater harvesting and solar heating strategies cuts down on the fresh water and the energy needs. Familiar palette of materials in rural landscape like brick, Cuddapah ( local black stone ), Terracotta tiles, Cement plastered and Paved surfaces along with wood adds to the experiential dimension as they are used in unfamiliar ways. This aspect of recasting contributes to the evolving nature of the landscape while maintaining tactile links to the place.