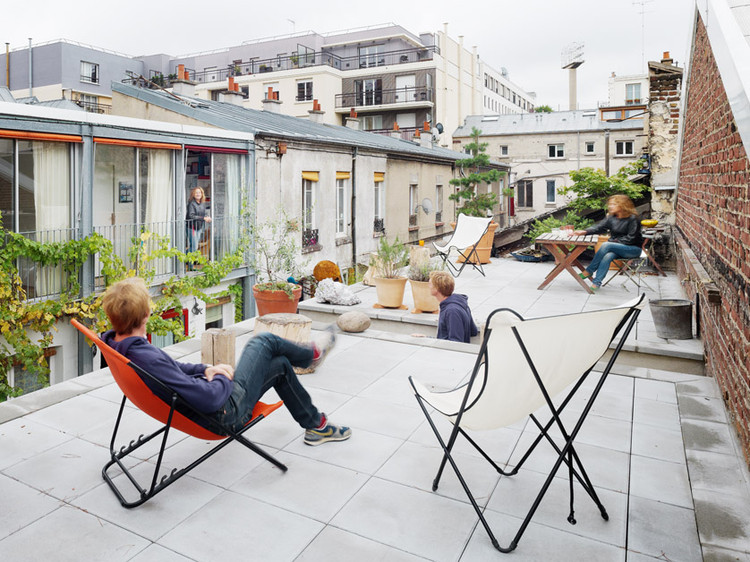 Text description provided by the architects. Jean-Christophe Dablemont and Sophie BarthÃ©lÃ©my, respectively ceramic artist and upholsterer, are living and working for nearly ten years with their child Ulysse in an alleyway neighboring the flea market area in the northern outskirt of Paris. The alley is traditionally formed of a row of residential houses on one side facing a row of studios on the other. Jean-Christophe and Sophie have their house right in front of their two studios.

A first architectural project has been commissioned to the architect David Duchein (HTC Architectures) in 2007 for the elevation of the house by adding an external steel structure and large window frames.

The second operation commissioned to FREAKS in 2012 concerned the â€œrenewalâ€ of the existing two studios. In the reality both have been crashed down and rebuilt anew within the same footprint to offer simple and optimized spaces.

For reasons of comfort and privatization, the staircase does not reach the ground of the alley : the first steps are formed with two tree stumps found in the forest, which can be moved. The underside of the staircase, the connection point between the two workshop spaces, accommodates a toilet and an large sink, accessible on each side.

The materials are humble and adapted to the construction process of the project (the access was relatively limited for the building companies and some parts of the project have been self-constructed â€‹â€‹by the owner himself). The main concrete structure has been made on site.The terrace is made of cement slabs on plot without railings. The whole is painted white (floors, walls, ceilings) for maximum light inside, and left rough on the outside.

The doors and windows were also made â€‹â€‹by the client himself : metal framing and double glazing openable in the central frame of each workshop spaces. Many potted plants already present naturally found their place at the top or at the foot of the building. The larger pots were lined up along the terrace to secure their guests while they were having sardine parties during the past summer warm evenings...