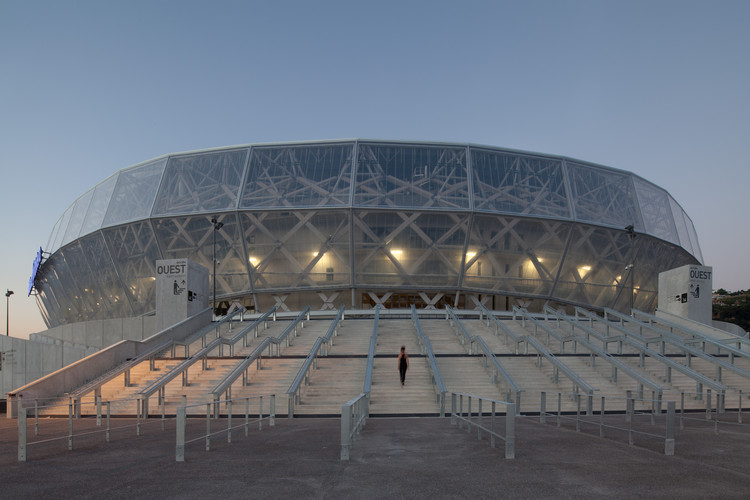 Text description provided by the architects. In December 2009, the city of Nice launched an international competition for the construction of a new 35,000-seat stadium capable of hosting large international competitions. The stadium would sit at the heart of the Eco Valley in the Plaine du Var, named an ‘Operation of National Interest’ (OIN) in March 2008, and was to be the first flagship project in the new district.

The competition programme – the product of a public-private partnership – included three projects to be built in a seismic zone, each with a different completion date:

• a stadium with 35,000 seats, multi-purpose facilities (sports and concerts), UEFA approved, well-integrated with its urban environment, and in line with sustainable development principles

• a real estate development plan (PIA) including 29,000m² of retail space designed to animate the area

The Wilmotte & Associés SA / VINCI Concessions team submitted their proposal on 10 September 2010, and the city of Nice awarded them the commission in October. In February 2011, the partnership contract was signed with the Nice Eco Stadium Company (a subsidiary of VINCI Concessions), the Caisse des Dépôts et Consignations, and SEIEF (South Europe Infrastructure Equity Finance), and an institutional investor. Nice Eco Stadium was responsible for the design, financing, and construction of the stadium, and will be in charge of operations and maintenance for 30 years.

The intervention included a development plan based on retail, leisure, and food service. This plan was designed to work symbiotically with the stadium to create a coherent complex able to generate urban synergy, use, and energy. The plan provides more than 29,000m² of retail and leisure-related spaces on one side of the stadium. On the east side, there is a pedestrian mall with direct access to future tramway opening up to the future Eco Quarter.

The retail is mostly located at street level on the stadium concourse. There is a floor dedicated to the retail anchor stores.

The Plaine du Var Eco Quarter, adjacent to the stadium, - spans over 10.6 hectares, 44% of this is designated as residential. This new quarter is inserted within the Plaine du Var landscape. Originating in the Alps and flowing to the Mediterranean, the Var River winds along the valley bottom. The urban plan is reminiscent of the river’s meandering north to south course through the valley. This is complemented by a swathe of greenery running from east to west. A ring around the central park creates a ripple in this green swathe, offering a breath of fresh air to the offices and residences that will integrate seamlessly with these green spaces in the years to come.

The Musée National du Sport is a place for discussing, sharing, and promoting France’s sporting heritage. It is one of the world’s greatest collections of sport-related materials, containing more than 100,000 artefacts and documents, the oldest dating back to the 16th Century.

Located in the base of the Allianz Riviera beneath the concourse, the Musée National du Sport will open in 2014. 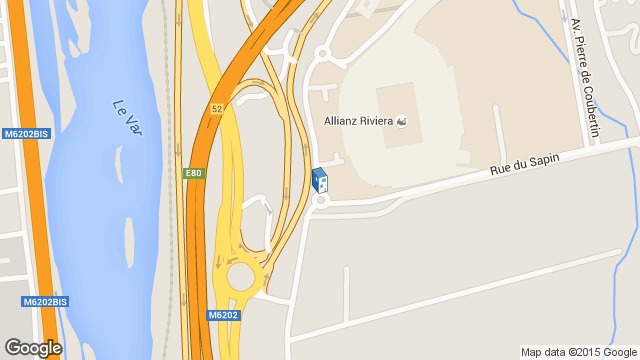