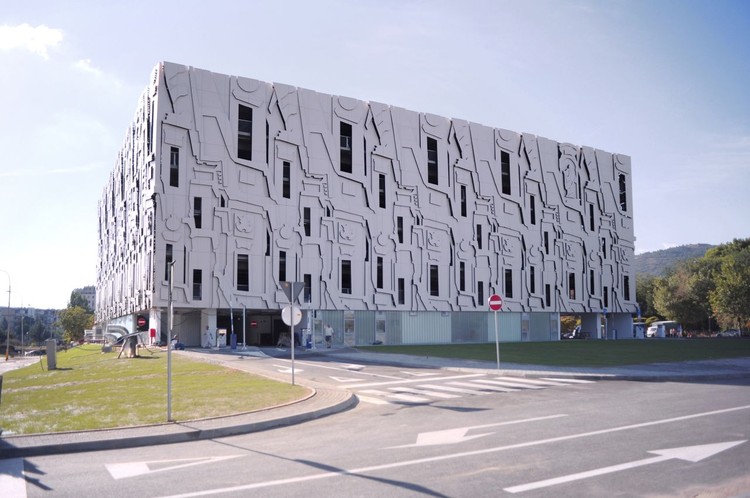 Text description provided by the architects. In February 2010, the Public Enterprise for Management of Residential and Commercial Properties of the Republic of Macedonia launched an open architectural competition for a parking garage in the city center of Skopje, which should provide 315 parking places as well as space for offices and retail. According to the competition brief, the garage should be designed in a “baroque, classic, neo-classic, romantic and neo-romantic style” (sic!).

This garage is one of several parking facilities which are projected within the frame of “Skopje 2014”, a gigantic restructuring project that was presented by the populist conservative government in 2010. Almost twenty years after the dissolution of Yugoslavia, this project is reinventing and reaffirmating Macedonia´s seperable, undeniable and glorified national identity through urbanism and architecture. Macedonian culture is celebrated by a large number of memorials, religious symbols and new public buildings which are mostly designed in a historicist style. Neo-baroque is the favorite one, with its connotation of power and impact on the masses. The extensive use of these styles is supposed to establish Skopje as the European, Christian, bourgeois city that it has never really been – and to deny its oriental, Islamic as well as it socialist, modern past.

All this is happening to a city that fifty years before has been declared an “Open City”, open to a society in flux. Following the devastating earthquake of 1963, a major international reconstruction effort under UN supervision was seen as an opportunity to rationalize the whole structure of the city. A totally new city center should be created, the Japanese architect Kenzo Tange was responsible for its master plan. The increasing mobility of the society has been one core topic of Tange´s plan, therefore he proposed a circulation system of concentric rings and radial axes, a transport hub called “City Gate” as well as facilities for individual parking beneath the high-density slab-block housing of the “City Wall”, originally planned for 30.000 inhabitants. Anyhow, the supply of parking facilities obviously didn´t match the needs of the time and they were soon transformed into private storage space, especially used by vendors of the nearby vegetable markets.

In recent years, the traffic in Skopje rapidly increased and parking is organized rather wildly. The city is willing to solve the problem by offering additional multi-storey space for parking. In the 2010 competition for the garage, Milan Mijalkovic together with ppag architects from Vienna handed in a project that subtly comments on today´s context of “Skopje 2014”. The project could not win the competition but it was purchased by the Public Enterprise and given to the city of Skopje (reportedly, through a personal intervention of the prime minister who was fond of the project´s façade). It was decided that the façade should be realized within another garage project that was already in the stage of planning and designed by two professors of the local faculty of architecture. There are several professors of the faculty who are – directly or indirectly – involved in the projects of “Skopje 2014” – a fact that might explain their rather cautious critique on the city´s antiquization.

The proposed façade interprets the wish for a historicist appearance without explicitly using the traditional language of historicism. It adapts the baroque idea of creating reality by the means of illusive perspective. Baroque artworks expand into the real space as well as vice versa the reality merges into the illusive perspective of the artwork. The starting point for the design of the façade is an amateur´s photograph showing a perspective view of historicist residential houses in Vienna. These distorted façades are multiplied and assembled to a surface of an unclear vanishing point. The surface is dissolved into four layers of tailored, shadow throwing composite panels on a steel construction. Transforming the familiar appearance of historicist residential houses into a strange cover of a “baroque garage” makes this new object uncanny, “unheimlich”. Although the reference is not very obvious, the beholder senses this uncanny, dreamlike – or nightmare like. This disturbing presence of the “baroque garage” subtly reflects the disturbing situation of “Skopje 2014”. 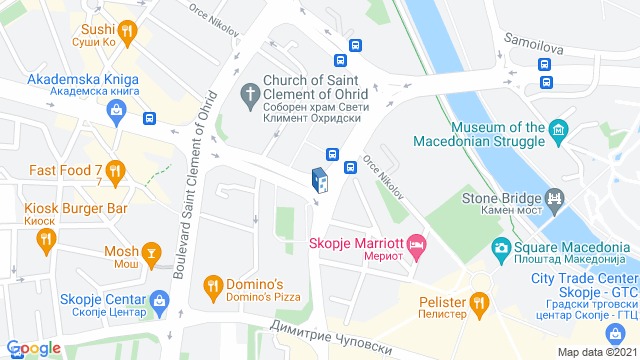