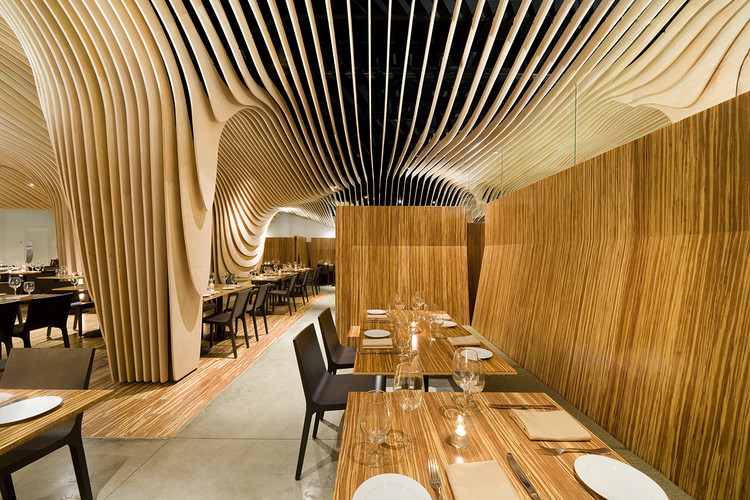 Located in an old banking hall, Banq is divided into two segments: a bar and a restaurant. The design of the space is conceptualized around the relationship of the ceiling to the ground.  If the ground needs to be flexible for the changing activities of the restaurant space, then the ceiling contains fixed programs that are part of the building's infrastructure-- the structure, drainage, mechanical equipment, sprinkler system, lighting, and other the acoustic systems.

We have developed a striated birch plywood-slatted system on the longitudinal axis that conceals the systems above while offering a virtual canopy under which to dine.  The geometry of the wood slats conforms to the equipment above, but they are also radiused to smoothen the relationship between other adjoining equipment. The columns and the wine storage, in the middle of the hall, serve to uphold the fiction, and appear suspended from the ceiling.  If the longitudinal axis emphasizes the seamless surface, then lateral views offer striated glimpses into the service space above, and demystify the illusion.

To underline this strategy, certain areas of the ceiling "slump", acknowledging the location of to place exit signs, lighting features, and other details.  Below the ceiling, the functional aspects of a dining space are fabricated with warm woods and re-laminated bamboo amplifying the striping affect already at play throughout the space. Striations of the ground, the furnishings, and the ceiling all conspire to create a total effect, embedding the diners into the grain of the restaurant. 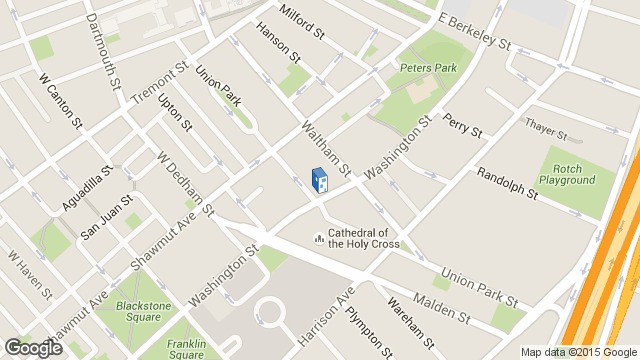