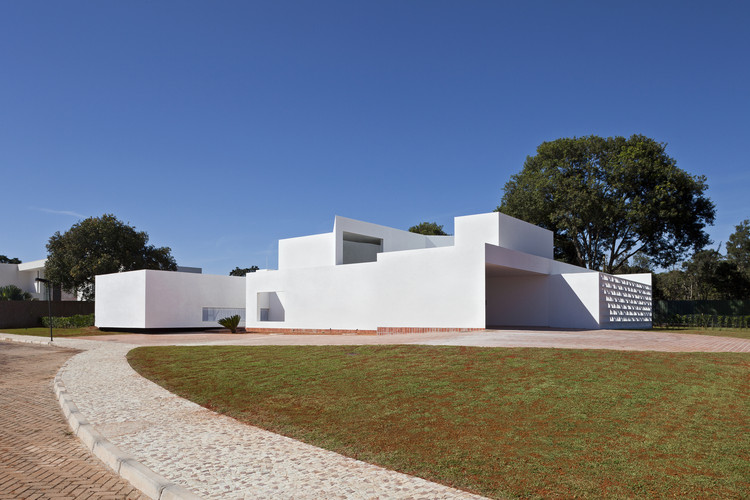 Text description provided by the architects. This house is located inside a small gated community. In this context, taken away from the city and far from its urban dynamics we felt the necessity to question the way in which the house would relate to its surroundings. Our answer was very influenced by the context and by the client´s desire and it was to  create an architecture that explores the visual heaviness of its masses and is introverted, more closed towards the street and open to the existing backyard. We didn´t have an urban life happening in the street right in front, so we felt we didn´t need to communicate the house with the street directly through transparency or big openings.

The operation we did was to replace the usual communication of the house with the street through traditional windows with one that is made through the volumes that form the building. Therefore we transformed the spaces created between the recessed volumes of the house in the interface between the house and the public space. Without big openings besides the ones towards the back garden we decided to animate the composition of the house volumes by associating them to the different functions of the program. The bedrooms are contained in a sequence of spaces facing the morning sun. They are linearly grouped so it would reflect the union of the family life.

Big openings and sliding glass doors face the existing forest behind the house. Internally there is no doors between the bedrooms, living room and services. The transition between these areas is insinuated through the natural light from internal winter gardens. Two singular elements stand aside at the top of the composition. They are triangular openings that open the living room to the sky, serving as spaces for sculptures and art. Seen from the street they are the windows of the house. At night they are lit up and insinuate the life happening inside. During the day they appear as forms with no content, reflecting the sky.