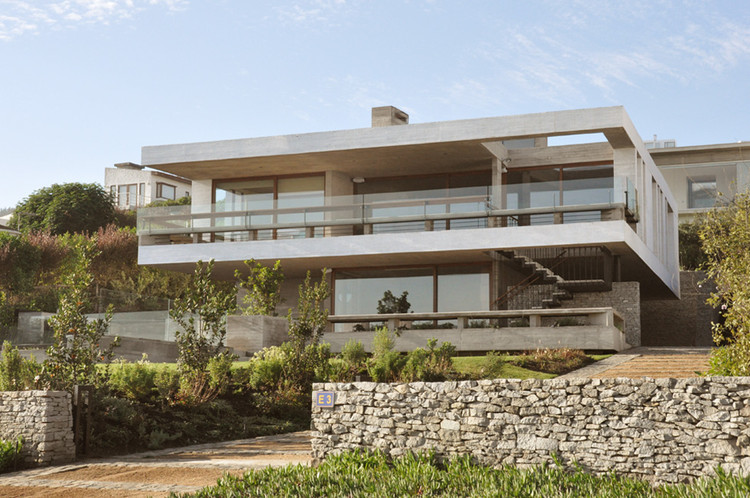 Text description provided by the architects. The assignment consisted on a single family home in the condominium summer resort Costa Cachagua in Zapallar. The plot had a moderate slope to the south-west with a nice view of the sea and Maitencillo.

The main concern was to make the house take advantage of views without generating inhospitable spaces due to the glare of the setting sun.

Thus, the house turns the main rooms to the sea but they are protected by large eaves formed by terraces to the south-west and parasols, allowing contemplation in shadow.

Another aim was to frame these overlooks with vegetation, in order to add sun protection while generating a green foreground which gives life to the interior, and bring to the second floor the sensation of being at garden level, without being so.

For this, we generated a continuous planter around 3 sides exposed to the sun, so deciduous creepers and plants wrap the house and views, adding bioclimatic passive protection against strong sun radiation.

In the summer, the creepers will hang from the planters and climb the parasol walls covering them with green leaves, bringing its shade, while in winter the leaves will change to red and then disappear to allow the house to absorb the sun's heat.

To work the slope it was decided to make a single retaining wall, clad in stone, which surrounds the house and confronted against the hill generating the plane of the first level. The house is separated from the wall, generating an edge courtyard which isolates from the moisture of the hill´s soil and allows the sunlight to enter the bedrooms on the first level. The ground floor is set back in order to generate eaves to protect it from rain and sun, which makes the second floor as suspended in an apparent lightness.In the hall´s area this surrounding courtyard extends further, to prioritize and define access. Programmatically was decided to separate the children area from the adult's rooms in order to reconcile simultaneous uses of a large number of people in a relatively tight area.

The bedrooms of kids and guests and the living room were located on the first level, connected directly to the garden, terrace and barbecue. At the second level, in order to appreciate the views even more, were placed all main rooms such as living room, kitchen, master bedroom and guest bedroom.

A major concern was that the house also maintains a "beach house" character although their high quality finishes. That is the reason why we kept the concepts of “lookout terrace”, "bench seat with backrest railing" and "external staircase" that connects all the rooms between them by the outside and directly to the garden.