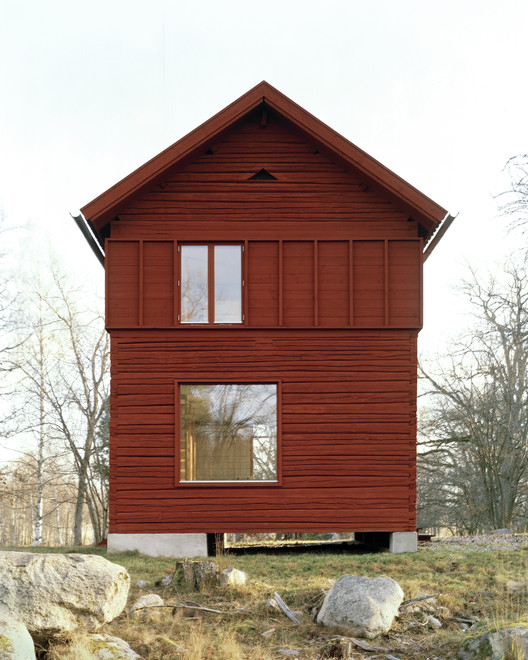 Text description provided by the architects. We found a small granary for sale outside Borlänge, in the Dalarna region of Sweden. It was a modest construction in design and dimensions, but expressed an uncompromising constructive attitude that interested us: Timbering as pure tectonics, materialized as a precise joining of individual elements that form a coherent unity.

The house was taken apart and moved to an old pasture along the shores of Lake Hjälmaren, a few kilometers from Arboga. Concrete plinths were cast as a new foundation before the timber structure was put back up again. Between the 15th and the 16th timber row, a new load-bearing wooden framework was installed to allow for a full-height upper floor. Then the rest of the timber structure and the old roof was put in place. The house was left to settle for a year, after which the construction continued. Floors were built and the walls were isolated on the inside. The interior walls of the upper floor were designed as floor-height trusses, spanning between the perimeter walls. This made it possible to leave the ground floor totally open, without any support for the upper floor. Interior materials were selected based on availability and price: oak wood from the site, and plywood from the local building merchant. The openings in the outer walls follow the logic of the design, with large windows in the massive timber wall and standing narrow windows fitted into the module of the new framework of the upper floor. The floor plan distribution is as simple as the volume, with a kitchen and living room in the ground floor and two bedrooms in the upper floor. Externally, the new additions were treated with the same red paint in a similar way as the original parts.

The project has, despite its small scale, served as a discussion of construction and architecture at our office. The use of an existing structure has also raised questions of the underlying structural and tectonic elements of the building tradition. Our ambition throughout the project has been to pursue and develop these basic architectural qualities.