Save
The Long House / Khosla Associates 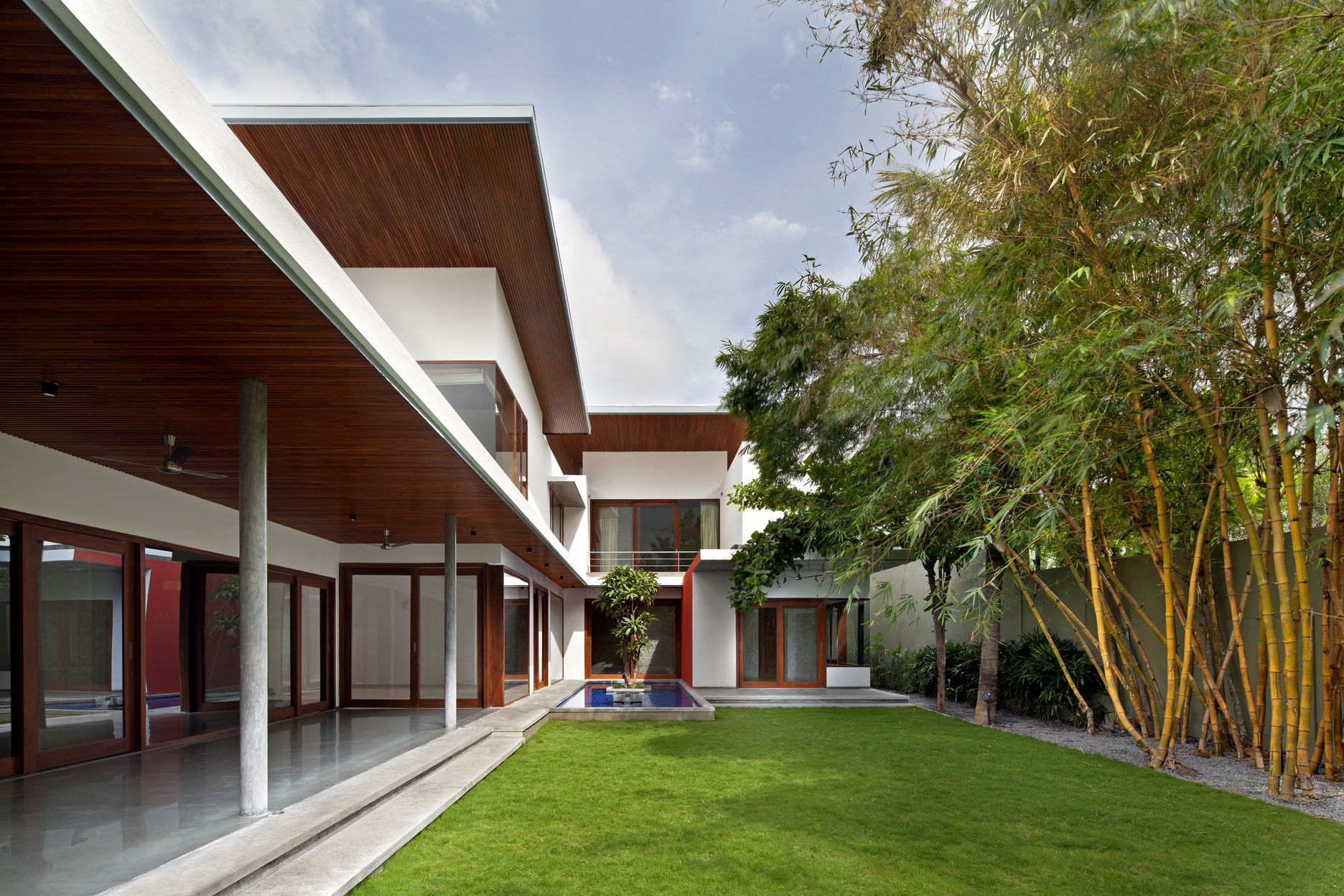 Text description provided by the architects. The program for The Long House was conceived of by Architect Sandeep Khosla and his graphic Designer wife Tania as a luxury home for themselves, with the intention of leasing out to a family of four.

Situated on a shady green avenue in a gated community complex in Bangalore, the house derives its form from the linearity of the site. The rectilinear 8000 sft site with a 120 ft. long frontage had an existing mature bamboo grove to its northern side that needed to be preserved as well as a row of fruit trees to its south.

Programmatically there was an intentional demarcation between public vs. private spaces. The ground floor has mostly public spaces such as living, dining, den, study, kitchen, utilities as well as a guest room and the upper floor has 3 private bedrooms and a family room.

Entry to the house is via a sculpted brick coloured wall. Traversing through a small court one enters the foyer. The first visual is a picture window framing a temple tree set afloat a linear blue water body and against the backdrop of a red wall. A succession of spaces unfolds to the east of the foyer, spatially flowing into one another; a spacious living room leads to a den and then into an intimate study via series of sliding pocket doors. The living spaces in turn flank a lengthy verandah that overlooks the north garden. The extended proportions of the verandah use the west to east axis of the site effectively.

West of the foyer is a generous sky- lit double height volume gently bathed with natural light via two narrow skylights. The staircase was crafted out of mild steel and timber and floats lightly within its surrounding volume.

The dining room is located such that it enjoys views of the water feature and garden to its east and the staircase to its south. Flanking the staircase and dining is an imposing double height wall that was crafted in form finished ribbed concrete.

One of the most exciting interventions of the Long House has been the customization we were able to achieve with the masons and carpenters. Certain vertical planes were cast in ribbed textured concrete. Special care was taken during construction in the repetitive wedge shaped timber shuttering to achieve seamless joints once the concrete was poured.  In the long verandah the same ribbed pattern is reflected as a timber clad ceiling that runs its entire length before folding down vertically in the form of ribbed concrete. The play between timber and cement is also reiterated through the house in other ways. Certain rooms like the den and study have teak veneer clad walls juxtaposed with polished cement rendered ceilings.

On the first floor, the master bedroom and one of the children's rooms have lofty 15ft high ceilings that break the massing and have sloping cantilevered roofs that open up towards the east. The underside of the roof overhangs are clad with ribbed wood.

The Long House proposes an exciting dialogue with the public street on its south as well as the private garden to its north. Public spaces like the dining, living, and den open up generously via large sliding glass doors to the verandah and private garden to its north, and the private bedrooms on the first floor open up to views of the verdant green cover of the fruit trees to the south.

The material usage is minimal. Polished beige marble, grey kota stone, and polished cement are juxtaposed with the warmth of timber frames, and ribbed teak cladding.

The design seeks to successfully negotiate the linearity of the site and the need to preserve the existing bamboo plantation by creating a lung space on the northeast.  The house keeps constant the need for an unfettered flow of light and air, adequate cross ventilation and views from each of the rooms to the surrounding greenery.