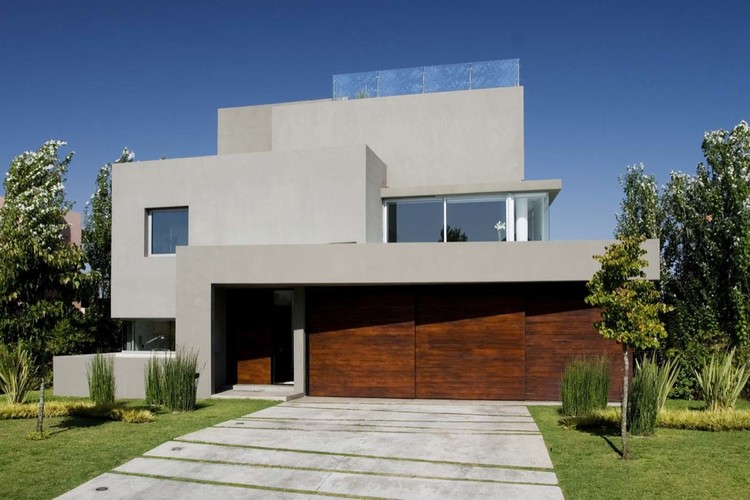 Text description provided by the architects. The waterfall house was conceived by the request of a young business man in a closed neighborhood. The particularities and requisites of the client, among with the lot’s characteristics, established the path to follow in the design process.

The borders of the small lot we are referring to, seem to disappear in the predominant visuals: the lake.

The surrounding houses, the sun’s path and the visual were needed to understand the emplacement.

At the back of the lot, at the ground level the lake has a shy presence. So it was considered to raise up to get a better look at the lake. This is the reason why it was decided to place the social area in the upper level, conquering the panoramic views to the lake during the day.

It is there where the water shows up. Unexpected at that height, it embraces the architecture and paints it with reflections, bringing life and movement.

Appearing and disappearing to the eyes of the user, relaxing with it’s sound, dazzling with reflects, going through a path that stimulates the senses.

The shallow pool expands the house limits, making them infinite. It erases the line between natural and artificial, inside and outside.

The elevated water falls, as a waterfall, over the swimming pool in the lower floor, refreshing the rooms and providing privacy at the same time. The water fall also filters the northern light making it less harmful.

The waterfall is the icon of this house; this is why it was named after it.

About the functionality of the house, we designed flexible spaces, so it could be adapted as much as to the social active life of our client, as to the needs of a future family. The flexibility allows isolating the private areas in the lower floor from the public areas in the first floor and part of the lower floor.

As a way to connect the street life with the inside of the house, was designed a mixed use room, used as a garage, playroom or to host parties.

The vertical circulation in triple height baths the inside with cenital light, joining the different levels.

The volumetric game outside and inside vanishes at the back, opening the spaces to the lake.

The balance between full and empty tries to avoid the adverse effects big windows may cause to thermal isolation.

In contrast, the front presents a closed design holding the service areas and giving privacy to the house. 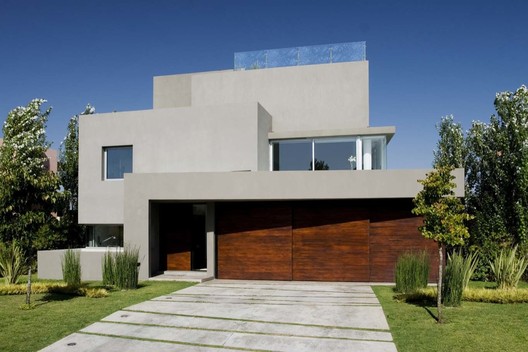