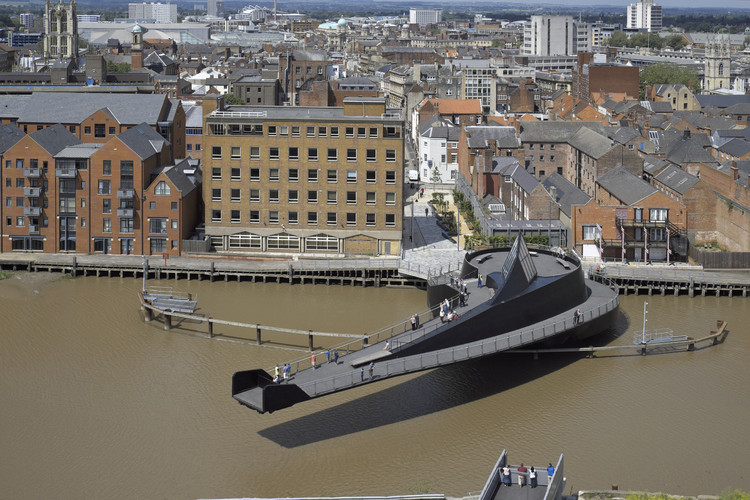 Text description provided by the architects. The structure consists of a steel spine cantilevering around from a 3-dimensional braced ring structure approximately 16m in diameter. The spine is a hybrid structure with the ‘root’ section conceived as a diagrid/shell structure and the tip as a shell structure. Steel plates clad the surface of the walkways whilst horizontal bracing provides additional longitudinal stiffness. The ring/drum/hub structure consists of columns connected to horizontal steel “wheel” structures forming both levels of the 3D ring. The circular hub section acts as a counterbalance to the cantilever section, with heavy RC slabs at both levels of the 3D ring structure. Braced frames provide stability of the ring structure. The hub is supported vertically on a central pintle and six single / four double wheel assemblies running on a 16m diameter flat circular track, secured to a concrete drum supported on ten 1.6m dia. piles over 30m long.

The bridge is supported on a series of wheels running on a circular 16m diameter track below the hub, like a railway turntable. Three electric bevel gear units drive the bridge which pivots around a central slew bearing. The bridge is operated from a radio pendant. The whole sequence takes around 2 minutes. The bridge operator closes a gate at the East bank triggering the opening of the bridge. There are no barriers at the west bank so people can freely walk on and off while it is in motion. The speed of rotation at that edge is slow - less than 0.15m/sec, (less than half the speed of the London Eye) so can be stepped across safely.

Sutton Vane Associates were commissioned to design the lighting for the bridge and the landscaping at both ends. The lighting provides functional and energy efficient illumination of the deck of the bridge by specially designed small fittings that are integrated within the balustrade. These fittings were designed to deliberately allow a little light out over the water so at night the shape of the bridge is defined by the points of light from the line of fittings. On the fin of the bridge Sutton Vane Associates designed tiny points of light that emphasise the shape and which come on when the bridge moves. Around the joint between the bank and the bridge is a row of recessed lights which also spring into life when the bridge moves. The lighting adds to the drama when this extraordinary structure moves.

The west bank of the bridge, which leads to the Old Town and is part of the Old Town Conservation Area, has been re-landscaped by Grontmij. A car park along Scale Lane Staith has been replaced with a series of informal ‘garden rooms’ stepping up to the river side.(with its increased flood defence level) and leading to a new paved square which will eventually provide space for al fresco seating for the restaurant. The original cobbles of the original staith have been retained and re-laid. A green wall of planting will provides a cohesive edge and screen the adjacent building once it matures. On the east bank, pending future redevelopment of the riverside site, a temporary ramped path has been laid which orientates pedestrians to Hull’s main visitor attraction The Deep. 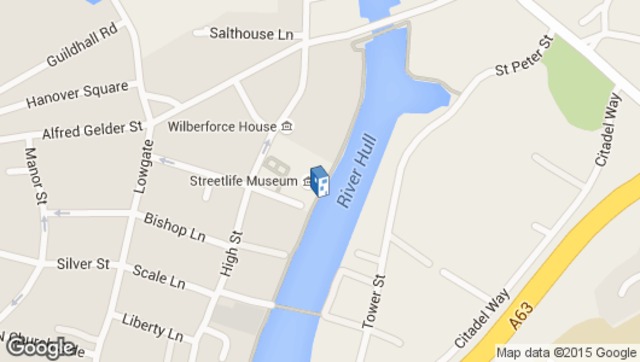