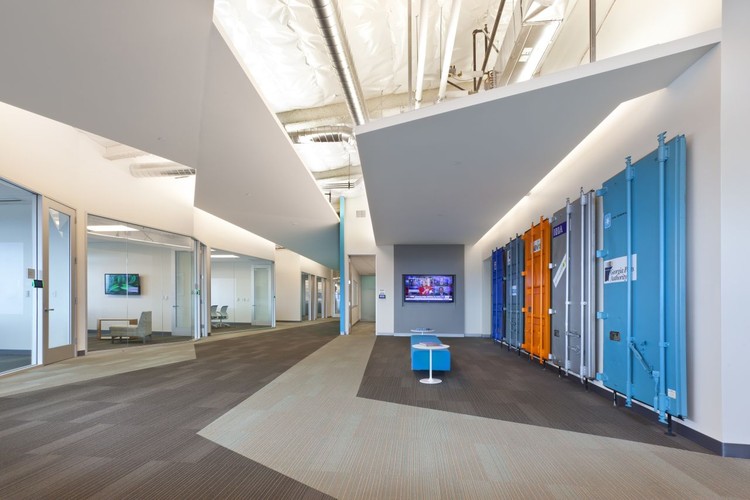 Text description provided by the architects. Twenty-five years ago, two UC Berkeley PhDs founded Navis to solve operational challenges in storing containers on shipping vessels. Eventually the founders developed a complete terminal operating system that can handle the logistics of an entire shipyard, tracking movement of containers from the ships to trucks and railcars. Today, Navis represents 25 to 30% of the world’s market share in terminal operating systems software.

The company has always been headquartered in Oakland. When Navis decided to move to new headquarters to Oakland’s Jack London Square, there was an opportunity to invigorate a company culture that flows between collaborative and heads-down work styles.

Working with a limited budget, RMW devised an interior build-out for the 32,411-square-foot space that uses simple architectural elements—accent paint, carpeting, and ceiling and wall scrims—to encourage a directional flow toward cooperative gathering spots and to stimulate interaction. The strong angles of the finishes simultaneously recall compass points, sails, and nautical flags.

The design is organized to provide gathering spaces, open workstations, private offices, meeting rooms, and heads-down “pods” that can be easily navigated. Glass-walled meeting rooms along the expansive lobby’s ocean side allow daylight to spill through. A central copy room/mailroom on the sixth floor functions as a visual landing space, a nexus of pathways, accents, and angles. At the north end of the sixth floor, the cafeteria features a blue scrim that crests like a wave overhead.

As a reminder of the company’s roots as a small start-up, the reception area incorporates a neon sign. Back in 1990, Navis had its offices on the second floor of a building on Franklin Street in Oakland, above a defunct office furniture store that had left behind a sign reading “DESKS.” In 1995, when the company expanded into the former store space, it had the neon sign restored and altered to read “NAVIS.” The shipping container doors featured in the current reception area are another relic from that time: acquired from a scrap metal yard, they were refurbished in Navis company colors to serve as a daily reminder for staff of the industry and purpose the company serves. 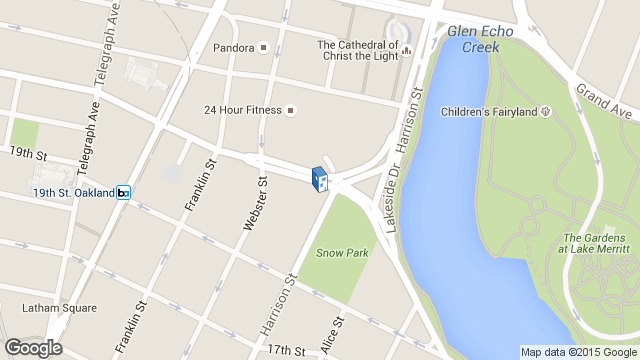