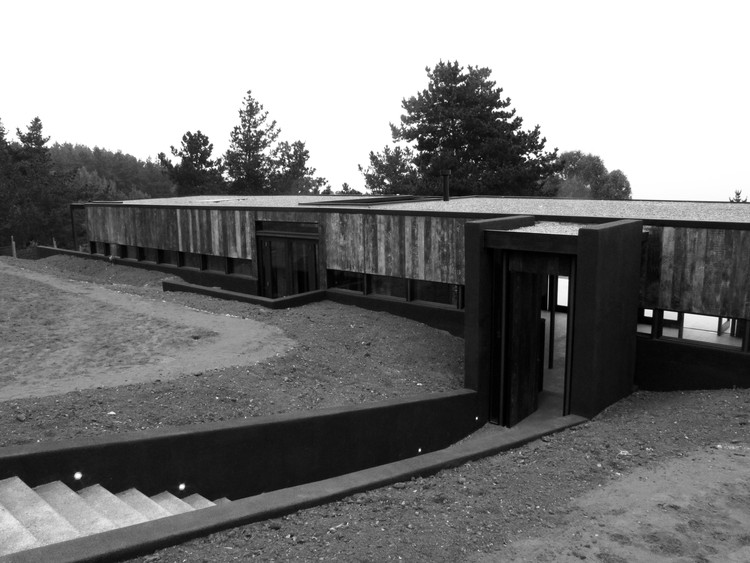 The above quote summarizes the essential will that gives shape to this Work. The programmatic requirements are relatively simple: second home, Cachagua, in the Chilean coast, a site of 5000 m2 with large domain of the horizon and distant views, some availability of economic resources, and customers with aesthetic sensibility. Simplicity and clarity in the formal resolution were their primary requirements, which matched with my own sensibility. The program should include separate areas for adults and children.

I chose a symmetric scheme, structured around two axes, one  longitudinal, north-south, spanning the width of the site along 45 mts, and one cross-slope, formed by the main entrance. This axis is convergent with the public areas of the house, which divide the program into both poles required for adults and children.

The west façade opens onto a large terrace that extends throughout the entire volume, constituting a sort of "fashion runway": the intention is to highlight the body, which wanders and walk along the horizontal plan, silhouetted against the horizon of the sea. The body gestures that unfold in leisure, in scenes of distention, now resting in deckchairs, now slowly entering the pool ...or perhaps indicating a vanishing point on the horizon. A boat, a cloud, a bird that migrates. In this aim are contained many visual and literary references I appreciate, specifically Michelangelo Antonioni´s films, the final scene of "Death in Venice" by Visconti, and some texts of Roland Barthes ...my inner purpose is to understand the architecture as living space that accommodates not only to mere daily actions, but Acts, full of meaning, elegance and distinction, framed by sober and austere spaces.