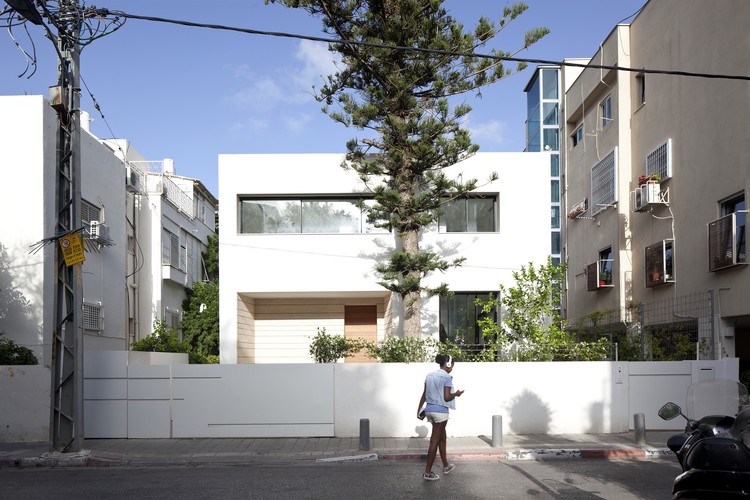 In the 1950s what was known as the "International Style" was highly developed in Tel Aviv. It developed thanks to architects who studied at the Bauhaus Institute in Germany and who then returned to Israel to continue their work. One of the architects who led the "International Style" was Dov Carmi. He designed many, usually large, projects. One of his more restrained projects was an urban villa in the center of Tel Aviv which he designed in 1951.

In his design, Carmi expressed his local interpretation of "Free Design" in which there is a  continuous series of spaces created by light and shadow, view and movement without creating one large, single and open space.

My office executed a massive reconstruction of the structure which included changing the  of the exterior facade and the division of the interior.  The main idea was to preserve the spirit of the original design  whilst implementing a contemporary, independent interpretation of the existing structure and its adaptation to contemporary technologies, materials and knowledge.

During the project, we took great care to create an experience of defined, intimate and continuous spaces in a relatively restricted area; and this without detracting from the overall understanding of the entire structure.

The house is simple and minimalistic with the light and the materials creating drama and vitality.  The unique range of materials was preserved throughout the project.

The building's external facades were painted white and the profiles chosen are decks painted black, similar to the Bauhaus style.  The floor is of off-white concrete.  These monochromatic hues provide the background for the original materials that we decided to preserve.

The central wall that divides the entry space was preserved in its original form, built from hewed, course sandstone constructed in a unique composition.  The floor of the living room is wild, natural limestone of earth hues and changing sections.  The wall and the floor symbolize the building in its original state.  Around them is modern, minimalistic architecture which emphasis the space and the light. The project's furniture was carefully chosen to complete the overall experience of a living urban villa that conducts a dialogue between two worlds and two separate eras.