Aedas recently won the competition to design Xuhui Binjian Media City 188S-G-1 Tower and Podium with their very dynamic and unique shaped proposal. Located in Shanghai, their tower begins with an extruded rectangular plan, and independent from the podium, meets the ground to allow circulation around its base. More images and architects’ description after the break.

The tower will be situated in one of the blocks within a nine-block development in which the world renowned DreamWorks Animation will occupy several sites.  Going upward, the west wall is gradually warped to accommodate the subway setback that cuts off the corner of the otherwise square project site; and the north wall is warped to the east to acquire a desired view of DreamWorks sites and other neighboring blocks.

When designing the façade glazing pattern, Aedas was inspired by the three color pixels that a media display panel comprises. By utilizing groups of three glass panels and randomly angling them in one of four directions, the faceted window pattern will reflects the light like a diamond, mimicking the shimmering quality of a media screen.  Curtain wall details were then developed to accommodate small differences in glass sizes and the four different aluminum mullion angles to minimize costs and fabrication time.

The podium platform will serve as a large public green space with several delicate glass boxes floating above with retail, restaurant and café programs. Flying above the glass boxes is a large warped surface canopy whose form is intended as a horizontal counterpart to the vertical warped surface of the tower.  The canopy will serve functionally as a covered outdoor space for public events and open circulation.

The tower and podium are preliminarily designed to achieve a LEED gold rating. 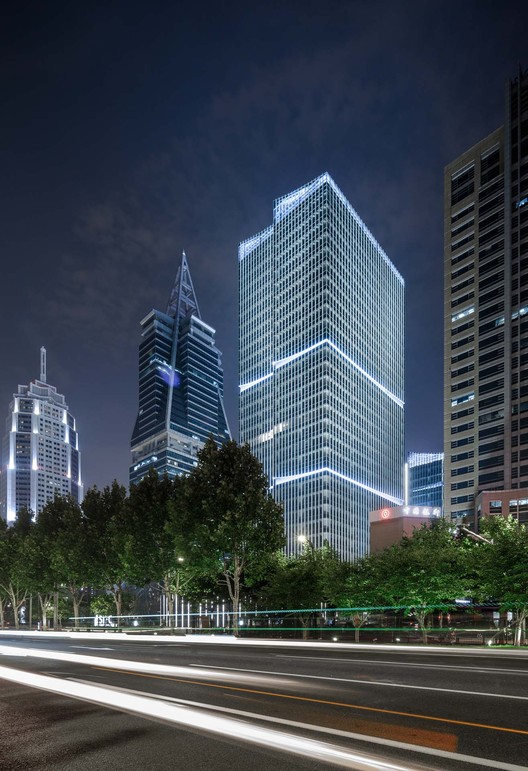