The International conference center in Kyoto is a geometric megastructure of exposed, reinforced concrete designed by Japanese architect Sachio Otani in 1963. Although relatively unknown, the Center is a unique, Modern masterpiece that re-interprets traditional Japanese architecture and asserts itself powerfully into its peaceful, natural surroundings. 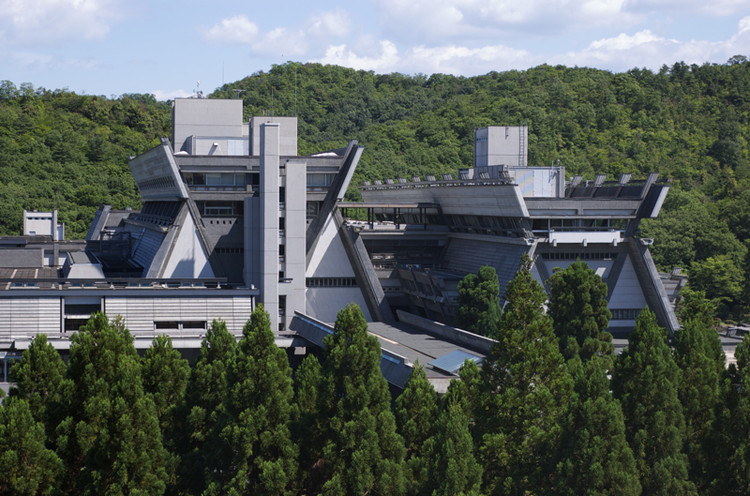 In 1963 Japan’s first national architecture competition was held for “A conference center that must function as a new symbol of Kyoto." Out of the 195 entries that were submitted, the jury commissioned Sachio Otani, who had previously worked in Kenzo Tange’s studio on the Hiroshima Peace Memorial Museum (1955) and started his own practice in 1960.

Inspired by the project’s site on the shore of Lake Takaragaike, Otani sought a way to integrate the building’s brutalistic appearance into its green surroundings. He achieved this by designing an extensive Japanese garden with concrete pathways along the lake, providing visitors with a space that mediated the rigid concrete megastructucre and nature.

Because the building was to serve as a symbol of Japan for visitors from all over the world, Otani felt that the building should “reflect both traditional Japanese forms as well as the sophistication and practicality of modern architectural thinking." [1] Thus, the shape of the 156,000 square-meter structure, derived from a series of overlapping triangles that complement each other both visually and conceptually, is in fact a modern interpretation of traditional forms; the triangular base, inspired by the shape of the surrounding mountains, is topped by another, inverted triangle that mimics the shape of a traditional Japanese Pagoda.

One of the building’s most ingenious features is its reinforced concrete columns; inclined at a sixty-eight degree angle, they dramatically impact the interior space without reducing floor area. Also of note is the main conference hall, lit by a unique disc-shaped reflector. The space spans over four floors and can hold over 2000 people. Seventy percent of the building is comprised of lobbies and lounging areas that are illuminated by windows that provide breathtaking views of the building’s surroundings.

Today the center still facilitates its original purpose, housing dozens of conferences year round. Much attention was drawn to the center in 1997, when it housed the UN Framework Convention on Climate Change (COP3) that resulted in the famous Kyoto Protocol. 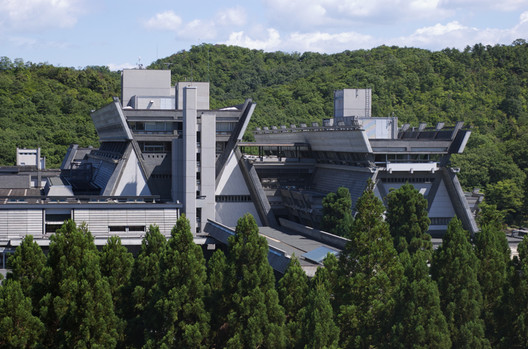