The 'Sa(ndy)licornia' proposal, which was one of the selected entries in the MOMA PS1 Rockaway Call for Ideas, is a reaction to the fact that in many ways Sandy, effectively, became a brand, and in doing so it provided all sorts of people with various sorts of "meaning". From this point of view, architect Daniel J Wilson focuses on how disasters can be understood to provide a form of social glue, clear-eyed perspectives about "what really matters", and the possibility of rebuilding something from scratch, only better. More images and architects' description after the break.

In regard to "meaning", there are several ways this appeared after Sandy. The people who showed their "support" by adding the sobriquet "Sandy Fundraiser" to their regular events.  The non-profits who, lets admit it, thrive off of events of this nature.  The photographers who descended and spruced up their portfolios - and only for the price of a metro ticket!  The makers of the cringeingly self-congratulatory and totally self-unaware short film "The Rider and the Storm" (which played at Tribeca, of course, and was produced by Olivia Wilde, no less - everyone wins!). The point being that amid all of this loud and declarative hand-wringing many people were getting something out of their peripheral Sandy experience.

This is, admittedly, a somewhat cynical view of what was certainly an outpouring of genuine good will that even Kant would have approved.  However, don't let the cynicism obscure the larger point - that Sandy wasn't ALL BAD.  That many people showed generosity that they hadn't know they were capable of.  Others interacted with neighbors whose names they had never bothered to know.  Still others learned painful but valuable lessons about the transience of life and the ultimately inconsequential nature of material goods.

Honestly, imagine how boring and bland a world without disaster would rapidly become. So the point of "Sa(ndy)licornia" was to embrace the fact that we live in a disaster filled world; and rather than try and embark on the impossible task of eliminating the disasters, to take a utilitarian view and simply figure out how we can make the best use of our disasters.

The specific idea outlined in the proposal is a simple and symbolic one, but the larger idea is complex and deserves serious consideration. 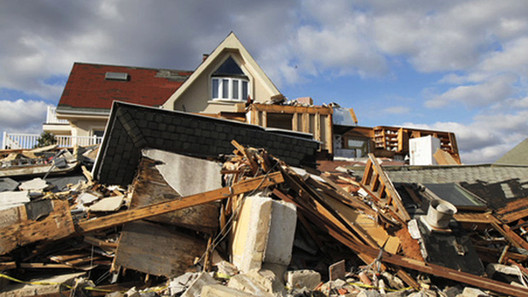