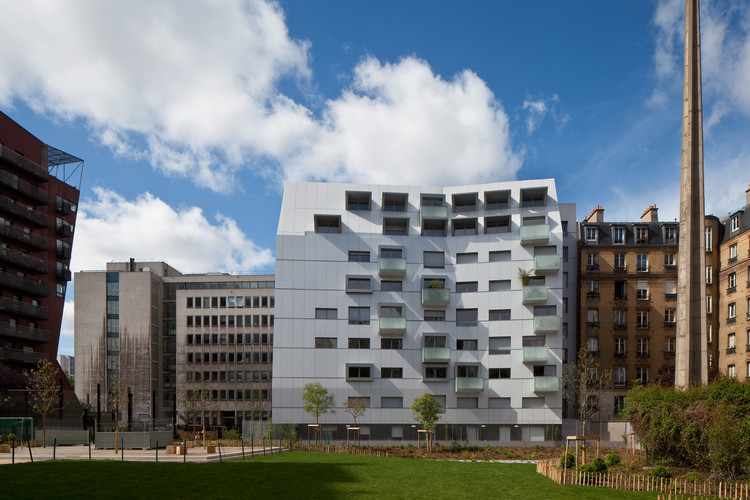 Text description provided by the architects. This long untouched sector of eastern Paris is currently undergoing a vast transformation. Paris Habitat-OPH owns 1222 housing units on a 5-hectare plot bordered by avenue de Flandre, Rue du maroc, Rue de Tanger and Rue Riquet in the south-west of the city’s 19th arrondissement. In 1995, the local authorities and Paris Habitat-OPH decided to begin regenerating this portion of city, situated in the heart of a rapidly expanding urban network. The block targeted by the project is enclosed and dense, comprising primarily social housing ranging from six to sixteen stories high, towers and low-rise buildings from the 1970s and, in the case of the Tectône Tower, the 1980s. The main aim of the project was to open up the block by redeveloping the Square du maroc. To this end, Paris-Habitat-OPH demolished the maroc Tower and replaced it with new housing. The local authorities created two new pedestrian streets between Rue de Tanger and avenue de Flandre, connected by a public garden. The building, which won the 2008 Paris Habitat architecture competition, marks the successful opening up of the block and stands at its entrance, now transformed into a public garden.

The building’s monolith design echoes the Tectône Tower and blends in with the garden, with three visible façades, two of which face onto the garden to the north and east. The loggias on the south side and the double skin on the east are designed as extensions of the living space, accessed via sliding white or transparent glass panels. The compact building comprises apartments stretching its full width on the narrower adjoining side, and apartments of a variety of orientations throughout the rest of the space. all offer street or garden views framed by prefabricated wooden boxes covered in lacquered steel.

The majority of the floors feature six apartments. The final two floors contain five and four apartments, with the building narrowing on the upper floors. All the apartments have balconies, loggias or private gardens on the ground floor. They either stretch the full width of the building or have corner lounges providing multiple exposures.

The structure is based on a system of slabs and load-bearing walls with a central concrete core containing the staircase and lift. The partitioning is independent of the structural frame created by the walls and slabs. The apartment lay-out has been designed to allow for changes to the partitioning, and each apartment is open-plan and can therefore be modified as needed.

The non-load bearing north and south walls are fitted with external insulation, which seals off the end of each slab to prevent thermal bridging. The system’s wooden framework is light and easy to construct. The panels comprise sheets of wood, mineral wool insulation and a rainscreen. a traditional wooden frame crowns the building on floors eight and nine at its steepest point (approx. 24°).

The external skin is light-sensitive alucoil cladding ranging from white to pale grey in colour. The loggias on the south side and the double skin on the east are designed as extensions of the living space. These are accessed by transparent or white sliding glass panels, which modulate sound and temperature. 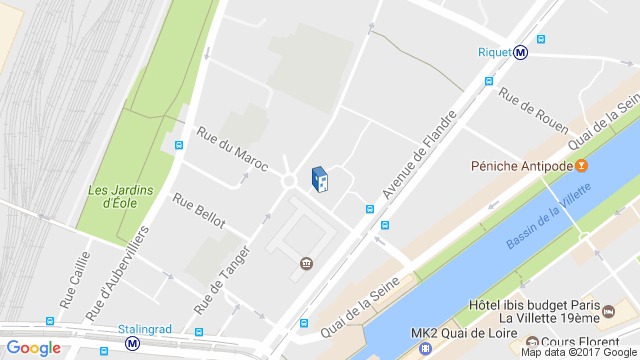 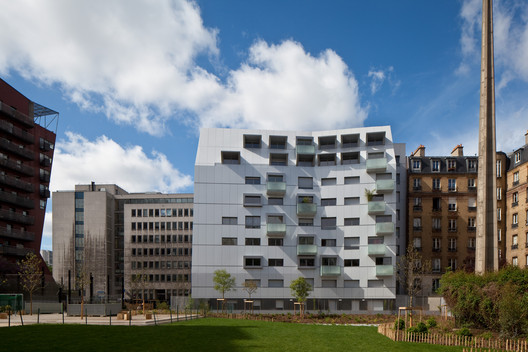