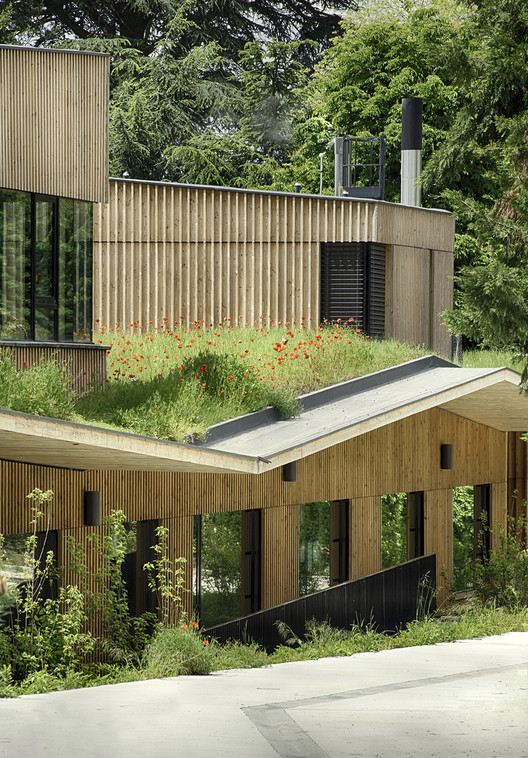 Text description provided by the architects. The Paul Chevallier school complex is situated in Rillieux-la-Pape, a northern suburb of Lyon. At 5,034 m2, it is an unusually large project; and this indicates the growing attractiveness of the area.

The complex currently comprises a nursery school and an elementary school. In 2014, a gym will be added, which will also be available for community activities. The site occupies an entire block, close to the centre of the district.

The two schools are functionally and administratively autonomous. While following on from each other, they make up a continuum, in an overall composition. They are made up of rectangular modules in "V" formations enclosing internal spaces which, in the case of the nursery school, is a garden, and, in that of the elementary school, a patio.

The design takes account of the sloping terrain. The structures in laminated KLH® panels have imposing planted-out roofs with overhangs. Lending its tone to the entire project, this extra "façade" represents the lyrical nature of the relationship between nature and architecture, in a Japanese-inspired atmosphere. It is accessible and visible from inside the buildings via the volumes of the first floor, part of which rises up over the roof and seems to float over this hanging garden.

Integration into the urban mosaic

The site is surrounded by disparate constructed forms that illustrate the historical development of the area. The old village stretches out along the Route de Strasbourg, and on the southern side there is a mix of apartment blocks and private housing developments. Dense, diverse plant life accompanies and modifies this urban environment.

Across from the site is the wooded Brosset park, with, on its perimeter, the Maison des Familles, the Centre Social and the Ecole de Musique, whose functions are complementary to those of the schools.

The nursery school occupies a calm, sheltered position in a garden at the heart of the site, with an area of vegetation close to a château and some villas. The elementary school has a façade that gives onto Rue Salignat. The future gym will follow the alignment of the street.

A pedestrian pathway leads to the entrance, organising the area where the parents congregate, and linking the schools to the village, as a prolongation to the existing axes of communication. It is lined by the structures themselves, thus leaving room for the playgrounds and gardens on the southern side.

One of the project's major characteristics is the relationship it establishes between architecture and nature. The structures are in keeping with their surroundings, at times allowing nature, more or less literally, to "get the upper hand".

The general profile is uniformly, deliberately low, harmonising with the slope in such a way as to minimise excavation and foundation work.

The project harmonises vegetation on the upper and lower levels. The volumes in wood are separated by the broad, planted-out roofs, with their waves of colour. The inclined roof planes and broad overhangs energise the silhouette, and attenuate the massiveness of the blocks.

This schema is an encouragement to strolling and dallying. It projects an impression of insouciance that is ideally suited to the world of children. From the inside, nature is framed by the large windows of the classrooms, and its close proximity makes it an element of the children's educational needs. The landscapers have provided places of discovery and experimentation. There is a vegetable garden beside Rue Salignat, and a discovery path on the way to the canteen in the northern wing of the nursery school. There are also walkways on the roofs, which introduce the children to another ambiance.

The two schools are unified by their broad, pleated roofs, the nursery school being lower down on the slope. The ground plan is simple, so that the children can easily find their way around. The geometry, and notably the passageways, contrast with the spatial intensity. The inner perspectives are telescoped or attenuated, depending on whether the walls are convex or concave. Views onto the outside world, and superimposed spaces, are always different, always new. There are multiple, changing, irregular facets. No two façades are the same. The complex is labile, asymmetrical, surprising.

In terms of organisation, the classrooms are rectangular, and can take thirty children comfortably. The collective spaces (library, concourse, music and computing rooms) stand out, in part, above the roofs. Large windows, sheltered by the roof projections and sunshades, open onto the playgrounds on the southern side. And the nursery school also receives natural light from the north.

Access to the nursery school classrooms is through cloakrooms, via yellow perforated metal entry points that indicate a passage from one world to another. The toilets and dormitories are shared by two classrooms, and there is customised furniture in three-ply spruce, from the cloakrooms to the cupboards in the classrooms.

The passageways have their own character, and are the project's main axes. The galleries, main entrance, hall, covered playground, corridors and terraces are carefully designed, spacious, with natural lighting, for easy occupation.

Wood is a pre-eminent presence. Tectoniques generally uses wood frames for its school projects, but in this case there are wood panels throughout, for the walls, façades and floors. They are left exposed on the inside surfaces, giving solidity and depth to the walls and partitions. This impression of mass and weight creates an impression that is unusual for construction in wood, which by its very nature is light.

Apart from the foundations, slabs, ground floor and stairwells, everything is in wood, including the lift shaft. The outer aspect of the complex is characterised by overhangs that are 2.4 m long and 0.18 m deep.

Structurally, the roof is made of KLH® panels, as mentioned above, while the upper storey has cavity floors in prefabricated laminates between OSB planking on dry slabs, with soft coverings.

From preparation (long) to implementation (short)

The design-construction process is similar to certain techniques that have been used in Austria. Industrially-produced panels and more elaborate components are used for on-site dry assembly. This is one of the most ambitious project of its kind to be implemented in France, using a constructional approach that is one of Tectoniques' specialities. 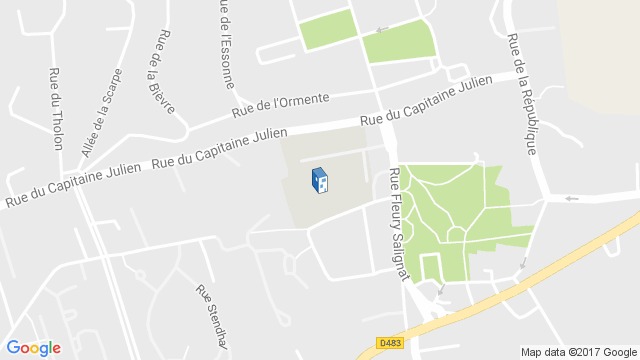