The South Molton Street Building is a new mixed-use development located on Oxford Street, London’s busiest shopping thoroughfare, at the junction with South Molton Street and Davies Street. It is adjacent to Bond Street Underground Station, which will benefit from the arrival of Crossrail in 2018 and an influx of additional visitors to the area. The development replaces a former pub with a new high quality mixed- use building comprising retail, office space and residential. The six-storey building is the brand headquarters and flagship store for Bosideng, China’s largest retailer (which has over 4000 outlets in China), introducing the brand to an international audience.

The design responds to the building’s unique location, its surrounding context within Mayfair and proximity to the historic route of the buried River Tyburn. Seeking to reflect the qualities of the area, it presents a contemporary sustainable architecture that embodies good design and craftsmanship.

Sited within a Conservation Area and highly prominent from all sides, there are five separate approach routes to the South Molton Street Building. DSDHA has taken a three-dimensional approach based on the kinetic experience of seeing and walking past the building from different points of view. Bookending a pedestrianised street, the form of the building is created to improve the status of the address, and as the facade gracefully turns the curved corner facing Oxford Street it reveals greater transparency on the retail and residential floors, evoking a sense of movement and change across the elevation. From Davies Street, a distinct residential and commercial entrance is created to visually terminate the street when approached from Brook Street and Berkeley Square.

The facade is composed of subtly varying profiled glazed terracotta tiles, designed specifically for the project in close collaboration with the manufacturer. Taking inspiration from the aqueous historic reference of the River Tyburn flowing along South Molton Street, the bespoke facade has been developed to create a perceived sense of movement or undulation as you pass by. The glazed battens are shaped to capture shadow and reflect light to create a dynamic and ever-changing elevation.

Glazed terracotta was chosen to complement the red brick and terracotta buildings of Mayfair, in particular Grays Antiques on Davies Street and the fine turreted and bay-windowed corner building on the junction of Oxford Street and South Molton Street. Black detailing and articulation relates to the contextual use of cast iron in Edwardian precedents, such as Claridges on Davies Street.

Terracotta battens run the length of the facade glazing, referencing the stone mullions evident in the locale. They mask the glazing, giving the building its forceful vertical emphasis and creating a unified skin to the entire block. When read as a whole the scale of the building is purposefully ambiguous and the architecture abstract in quality, so that it is difficult to ascribe a particular size to the building itself. The absence of manifest apertures or windows within the building’s enclosure is a deliberate device so that you read the building as one form, rather than an assembly of floor plates and mix of uses. It is simultaneously both human and urban scaled.

The building creates a memorable local landmark, bookending two fine streets and consolidating a busy junction. It can be read as a dynamic prow thrusting into the path of the hordes of shoppers marching east and west on Oxford Street, orientating them along South Molton Street. 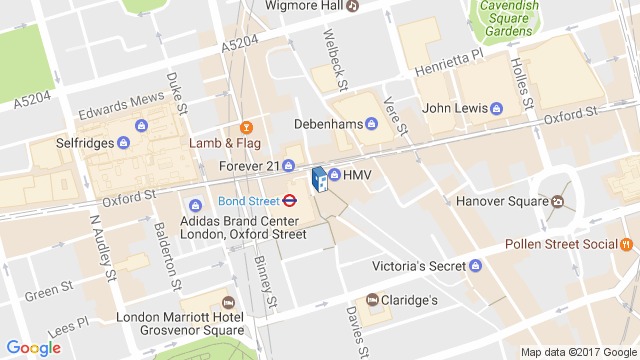 Location to be used only as a reference. It could indicate city/country but not exact address.
Share
Or
Copy
About this office
DSDHA
Office
•••