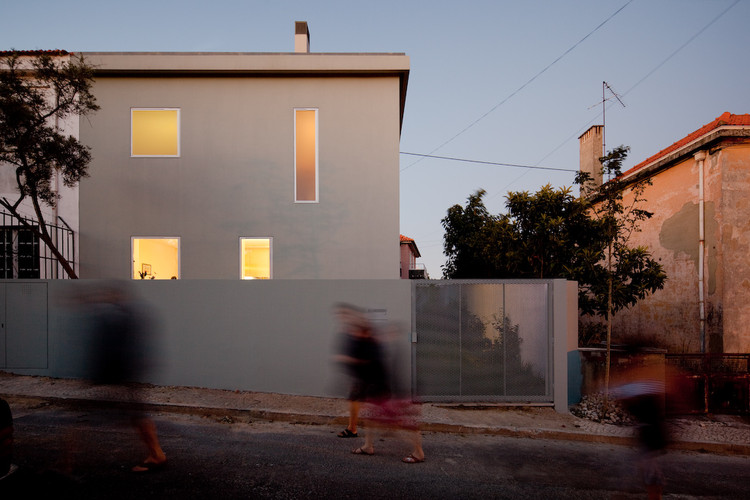 Text description provided by the architects. This project is located in Alto da Ajuda in Lisbon, once a working class neighborhood designed in the beginning of the 40’s during the dictatorship. The project’s strategy is the outcome of a fundamental question – How to conciliate all the preservation and zoning restrictions with a new program without compromising the original masterplan principles?

Knowing that the only possible approach allowed was to build one single volume, maintaining the roof’s slope and mimicking materials and elements a long time removed, we had to approach the addition as an imperceptible dilation of the existing volume.

Denied any formal invention and confronted with the inevitability of demolishing and rebuilding the existing house to extend it, we focused on the house’s performance as a way to compensate its small dimensions.

Three different conditions are created, each with its own identity; a sculptural basement is carved in the rock, the ground floor is arranged as a loft, a free space around a core and the first floor, containing all the rooms, is compartmented taking advantage of the roof’s slope, providing each room with a unique proportion.

In an extension of the client’s spatial memories, a material universe is created, Tadelakt, aluminum, exposed concrete and Riga wood floors are used to create an interior tactile experience.

In the exterior, the polished finishing is counteracted by an old-fashioned rough rendering, both pigmented, each with an indefinite tone, giving the house a mutable appearance: grey that oscillates between blue and green is confronted with pink, sometimes resembling purple and sometimes blue.

The garden, apparently not so relevant during the project development becomes a fundamental component, reacting to the building a wide range of annual plants, trees and bushes are specifically chosen to complement architecture, a luxurious range of textures surrounding the house.

The construction was faced as an open process, everything is tested, changed and experimented to exhaustion, the window glass becomes black, the interior shutters become translucent, perforated by laser cut, material finishing’s are invented. 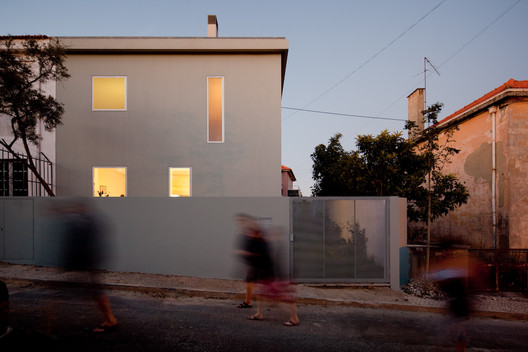