Text description provided by the architects. São Paulo based architect Guilherme Torres has developed ideas which fuse the modern and the traditional. Guilherme’s own house, designed by the architect himself, bears a chequered wood design, a kind of brise soleil called muxarabie, which is a classic feature in Eastern architecture. It was later assimilated by the Portuguese, who brought it to Brazil. This element, with its powerful aesthetic appeal, was adapted to this residence in the South of the country, and acts as a wooden ‘curtain’, allowing air flow, dimming light and also serving as a security feature.

“As soon as I saw the gently sloped plot surrounded by other houses, the idea of this large panel came to me, to ensure privacy for both them and their neighbors.” This monumental house stands out as a huge rectangular monolith with two large brickwork blocks in contrast with the upper volume in concrete. A few columns, huge spans and strategic walls create exquisite fine gardens that make up a refuge for this young couple and their two small children.

The decoration follows a jovial and Brazilian style with an alliance of Guilherme Torres’ design, including sofas and tables, and other great names of Brazilian design such as furniture designed by Sérgio Rodrigues and Carlos Motta. The composition of overlapping these Brazilian styles with international design is balanced by pieces from Tom Dixon and Iranian carpets, all sourced by the architect. The garden, designed by Alex Hanazaki has given the house an ethereal atmosphere due to the movement of Texan plume grass. 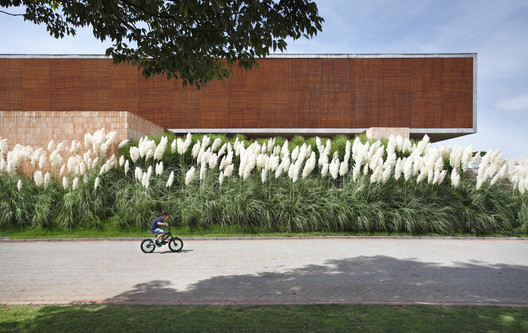