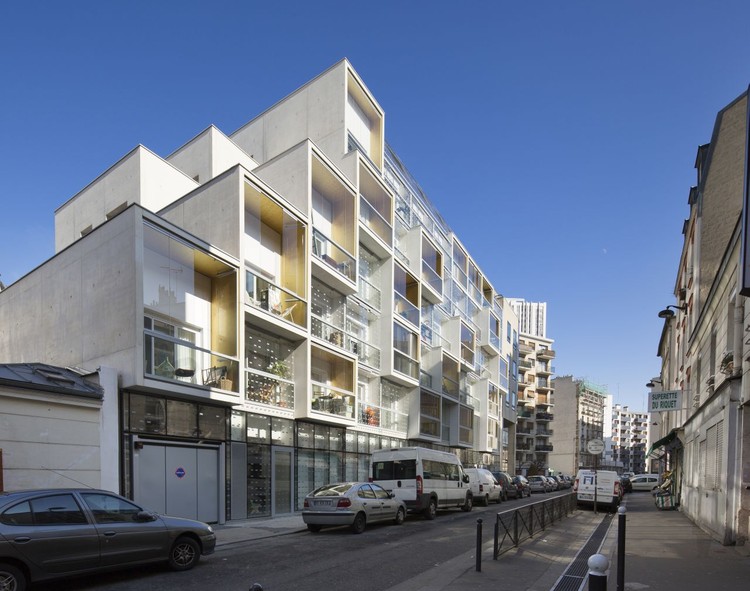 Text description provided by the architects. The situation of the plot at number 16 rue Riquet is exceptional: largely visible from the corner of Avenue de Flandre, it is very close to the Bassin de la Villette and has a length of 36 meters of frontage facing south with a depth varying from 18 to 22 meters. The building at the corner of Avenue de Flandre constructed at right angles as well as the small buildings with adjoining ground floors gives to the western corner of the plot a very valuable “faubourg” touch. On the other side of the same street, the large gable of number 14 allows the new building to be built upon. The whole of these characteristics bear a rich urban potential. Our project aims at making the most of it in the setting up and design of the new building.

The private owner has a vacant land of 700 square meters located rue Riquet in the 19th arrondissement of Paris, near le Bassin de la Villette and Avenue de Flandre. He has decided to build 28 free rental units with a crèche on the ground floor (run by the association “ ABC childcare”). Some options have come out as obvious: - To develop an environmental approach in the first stage of the design, with the integration of engineering consultants specialized in “High Environmental Quality”, RFR Elements, - To make the most of the linear façade - To gradually move west back from the neighbouring building and create views for the new building. - To create a garden at the bottom of the plot and a way to lead to the block of flats from the rear on the north side.

What the operation aims at: The owner together with his project delegate AURIS has set the following targets: - To get a building project both robust and lasting with an architectural signature. - To optimize the building capacity in order to receive the bonus floor area ratio by getting the BBC Label with HQE certification.

To create a building matching the values of project management particularly on the following aspects: aesthetics and urban integration, quality and sustainability. To respect the following constraints: - To create business premises on the ground floor to become later a crèche run by an association. - To optimize the design of the building in order to reduce operating costs and thus the costs charged to tenants. - To optimize maintenance costs. - To reduce energy consumption. - To offer a balanced distribution of typologies.

Through-ventilation in summer, very appropriate to refresh the flats at night and thus lob the peaks of heat. To secure a thermally efficient project, losses should be minimized. The thermal performance of the envelope has been obtained by the systematic elimination of thermal bridges. That has been done by: - The choice of insulation from the outside (material stands before the insulation slab nose). - The use of thermal break on the south side to detach the thermal structure at the front of the inner façade (unheated part) from the inside of the flats. - The choice of a console on the north side meant to carry for a limited period the floor of the corridors.

The south façade is organized on a principle of loggia. The thermal limit is located at the level of the 30 % opaque and double- glazed very efficient inner façade. The exterior sliding window pane is a simple, slightly printed glazing for the bedrooms and transparent for the living-rooms. In winter and at the beginning/ end of the mid- season that is to say during the heating period which usually runs from mid- October to mid - March, these loggias play the role of a buffer space whose function from a thermal point of view can be developed in three ways: - function of protection of the inner glazing against the effects of the wind, which result in increased heat transfer and infiltration of cold air, -function of heat buildup when the weather is sunny and the loggia exposed to direct sunlight, the temperature is then higher than the outside temperature, - function of preheating the fresh air, theair intakes for mechanical ventilation being placed outsidethe rooms and lounges thus the loggia (appropriate as far as energy and thermal comfort are concerned).

As winning project of the call for low consumption building projects (BBC) from ADEME 2010, and having obtained the certification Cerqual H & E profil A,we have offered a philosophy of clean environmental approach. The project is part of a plot of high quality characterized by a significant linear facing south. Before the sketch work was carried out, the design team has focused on environmental issues so in our answer the issue is intimately linked to the architectural offer and rooted in fundamental elements of the quality of life.

As far as the ground plan and spatial organization are concerned, the qualities of the project are obvious: all flats are through and the bathrooms get daylight. What’s more, each flat opens widely on to the south side to capture the most of the sun. The inner environmental qualities of our project consist in: - A supply of free sun on the southern façade. - Possibility of a through ventilation in summer, appropriate to refresh the flats at night and thus lob the peaks of heat. - These qualities have a large impact on comfort but also on energy consumption: less heating needed in winter and in summer, no discomfort which would likely lead to the use of side air conditioners, disastrous in terms of energy and environment. We should also mention as highly appropriate from an environmental point of view the fact that the parts in common are mostly on the outside of the buildings: this will reduce heating consumption, artificial lighting and thus the costs.

Making the most of the south façade can be achieved through the design of a thermal façade together with private outdoor spaces that increase the comfort and quality of the flats. The loggia is a buffer zone consisting in two sliding glass walls that can open and close according to the variations of temperature. This concept provides several functions: - A function of protection: heat losses are reduced. - A supply of free heating by the sun: that heat is absorbed by the floor and the walls and released at night. - Given the 1.700 hours of sunshine per year, this supply is particularly significant in terms of energy savings. - The function of preheating fresh air, provided by controled mechanical ventilation.

This « thick » façade consisting in loggias running outside along the living- rooms and the bedrooms provide a nice patio area. The depth of these loggias allows tables and chairs to enjoy the sun. As extensions of the living-rooms some of the loggias have clear glass bays on two levels. This extra space can be opened or closed depending on the sunlight. It is both a balcony and a winter garden. As extensions of the bedrooms loggias have clear glass bays in the foreground and screened glass bays over the street. This treatmentfiltersviews and sunshine for more privacy.

Neighbouring buildings at number 18 rue Riquet have an identity of their own: they form a complex with a very “faubourg” touch in the type and height of the buildings and the imbrication of the plots. It appeared to us that in many ways there was a strong connection between the project and this complex: - There must be respect in the way the buildings are linked, the project must not crush the existing buildings nor pour too much shade on them - The project must offer flats widely opened on the outside with views to the west (good position, facing multiple directions). - Sunlight should reach the garden at the bottom of the plot.

For all these reasons we opted for gradually decreasing terraces on its western side. The terraces would run from west to east but also from south to north which allows light to reach the bottom of the plot. The choice of terraces and vegetal roofs make it even more pleasant for future residents and the neighourhood. Consistent with Parisian architecture and in accordance with the Local Urbanism Plan, the project suggests marking a base to ground floor by the building of a glass façade running all the imposed 3.20 meters of height. The two last levels stand back in conformity with the templates, so that the attic stands out. The yard created at the north east corner of the plot as an extension of the existing adjoining courtyards is there to create crossing flats.

A large courtyard with a real garden for the crèche on the groundfloor. Keeping in mind the fact that the flat is located in a plant growing area, the two of them form a large open space of pleasant proportions: 150 square meters. This creates a vegetal strip of land which can be enjoyed not only from the ground floor but also from the corridors of distribution and the west terraces. These buildings have an open outlook and leave perspectives free.

And finally this garden is a valuable space for the buildings close to the imbricate plots. As an extension of an already existing adjoining yard, a yard in the corner allows the creation of crossing flats and on a city scale to keep open spaces designed to let the housing block breathe. On the last floor, the roof terrace of the studio R 5 is a common terrace, sheltered from the street and multi-orientated. Each flat except for the studios overlooking the courtyard owns a private outdoor loggia. The western corner flats even have a terrace facing southwest.

The very thin (8 meters inside the flats) building allows the creation of all-through and bright buildings on the following lay-out: - Halls, kitchens and bathrooms facing north. - Living- rooms and bedrooms with loggias facing south. All flats are at least all- through flats. Those located on the western side face south-west and north. There is a flat on the ground floor with a 35 square meter terrace facing west. Except for the two rooms overlooking the courtyard, they all have private outdoor space. The ceilings are 2.50 meter high and on the west side living- rooms have partial double heights( + 1 meter). Typologies follow that pattern: seven studios, eight one-bedroom flats, five three-room flats, eight four-room flats. 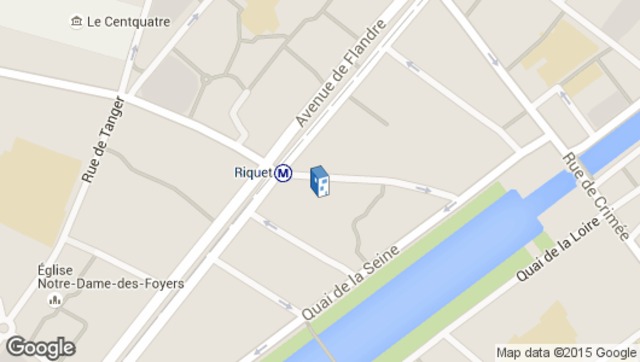