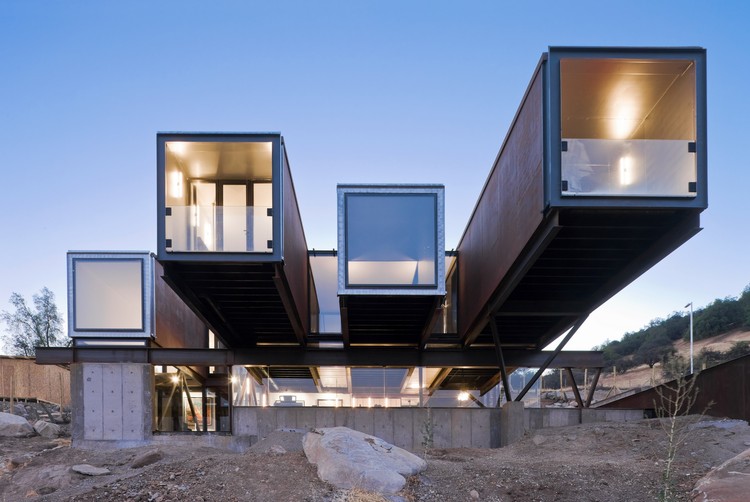 Text description provided by the architects. This prefabricated house for an art collector and his family was built in the outskirts of Santiago in a new suburban residential area. In order to reduce construction time and costs, second hand shipping containers were used as follow: Five 40 “standard containers, Six 20“ standard containers and one 40“ open top container for the swimming pool.

Putting aside the fulfillment of the brief; the main purposes of the house were two:

The second one was to allow the external air to run smoothly and easily through the all house and its different parts In order to avoid mechanical cooling.

With regard to the former, the strategy to achieve the proposed integration to the territory, consisted in placing the volumes of the house as if they where resting on the slope and allowing the volumes, lets say; to be blended by the slope. As a result of this tide adjustment of the house to the natural ground; there are generated the entrance to the house and the children sleeping rooms having each one an inclined inner space which is both the skylight and the bed place in the room.

In relation to the latter; the strategy for improving air movement through the house consisted in organizing the program along stripes and keeping interstitial spaces among them for the circulation of both; the inhabitants and the cool air that comes from the mountains. At the same time, the proposed interstitial spaces increases the house perimeter which allows most of the times to have light and air entering the spaces from at least two opposite sides. As a consequence of this will, windows and doors are aligned along axes that cut the stripes, easing therefore air movement and also creating visual integration

Construction phases consisted in: firstly; placing the retaining walls to create a horizontal plane to place the public areas of the house. Secondly; in mounting the containers and ensemble them on top to place the private areas and thirdly; to wrap the containers with a unitarian material which at the time that integrates the parts also creates a ventilated façade that temperate the interior spaces.

The material palette was chosen having in mind not only low cost materials but low maintenance as well. In the election of materials it was also important to analyze their capacity to age well an to incorporate time passing as something that adds value to material.

Architectonic elements such as windows, doors, and skylights are rationalized and repeated all over the house not just to reduce cost but also in order to create and integrated architectonic peace. 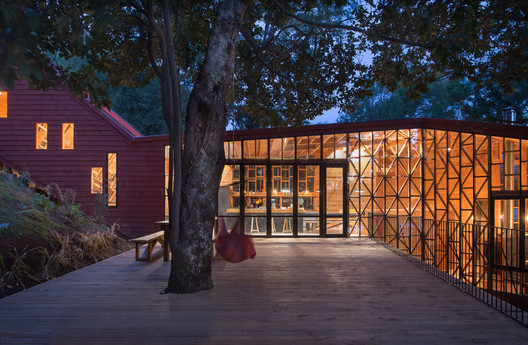