Designed by B2 Architecture, their first prize winning design for the Instant House @ School Competition is an oasis for children that breaks down the rigorosity with the help of organic and playful shapes. Located in a strictly orthogonal urban context, in the street of Via Ugo Betti in Milan, the building and its surroundings will create a bridge between the neighborhood and the children by orienting itself to the main directions of the site. More images and architects’ description after the break.

The design respects its weather context and embraces the nature that is already on there. The Small Explorers Kindergarten resulted from a careful analysis of the site´s existing landscape and context, in order to emphasize and preserve as many of the present qualities as possible.  The building covers 679 square meters and is able to accommodate around 90 children.

The kindergarten takes shape from two types of modules, the connector and the room type, which manage to easily organize the different functions required and yet always leave the possibility of extending the building if needed. The modules can be combined with endless possibilities, resulting in a different building every time, but with a cohesive identity bridging them. The modules are placed in such way that the big common garden becomes the core of the building, and the place where all the spaces can open to. The size, proportions and diversity of the Small Explorers Kindergarten allow that everybody – children, teachers and parents – to feel at home.

There are rooms for all of the children's personalities: for those who like to paint and draw, run around and exercise, sing or play theater, the ones who love the sandbox, for the ones that want to experiment while playing or for the ones that spend their time taking care of animals.

The kindergarten is comprised of three types of areas: the classrooms sections, the common areas and the ancillary rooms. The classroom sections can be either closed into three separate sections, or can be opened forming a large open-space. Each of the three sections is organized around a small common garden that can be accessed from all areas.  One of the classrooms is a room with stacked beds which allows for space variations; the folding beds are openable, so that this room can become a bedroom, an amphitheatre or a various activities classroom.

The common areas are flexible in their arrangement and are directly connected to the main garden and the playground, acting as a covered space that can take any character. The common areas can gather the parents and the children for meetings or theater, they house the small catered cantine and the open kitchen which is accessible to the kids as well, and also include relaxation or communal learning zones. The common areas are also the connection between the three classroom sections and can accommodate all the children at the same time. Along with the central common garden, these areas are an enlarged variation of the classroom sections, acting almost the same, but on a bigger scale.

A place for curiosity and inquisitive minds, the Small Explorers Kindergarten blends the exterior and the interior seamlessly together. 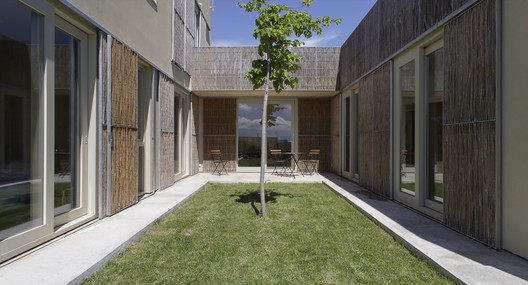