Taking its name from the elevation above which the city is safe from floods, The '28+' proposal by Michael Sorkin Studio for the MOMA PS1 Rockaway Call for Ideas is a habitable levee. Not simply does it allow the protection – and selective replacement – of buildings otherwise at risk, it actually increases the stock of waterfront residences and commercial spaces and improves public transit connections to the rest of the city. More images and architects' description after the break.

Hurricane Sandy has been a wake-up call for New York City. Global warming harbingers a future of rising seas and energetic storms against which we have no choice but to protect ourselves. The means will include both soft solutions – swales and wetlands, porous paving, green roofs and oyster beds – and hard – dikes, levees, walls, and flood gates. This proposal for a habitable levee falls on the hard side and – short of massive population displacement – only such a set of rigid barriers can protect many areas of the city from storm surges of Sandy's magnitude.

We have designed a barrier that connects this contour, beginning from a ridge at the end of the Rockaways, running along the peninsula, crossing the opening of Jamaica Bay with an operable gate, snaking around Coney Island and meeting another gate at the Verrazano Narrows. A smaller gate at Arthur Kill completes the system. There is nothing particularly unorthodox in this alignment.

The project also achieves self-sufficiency in water harvesting and sewage treatment and generates fully half of the energy it requires. Although any such system would require the collaboration of many architects and a variety of expressions harmonized with local conditions, the portion we have illustrated is designed for modular construction and proposes that factory-built components be delivered from the sea side.

Finally, we have calculated that such a project might be fully self-financing. By topping the apparatus of flood protection with what would surely be highly desirable places to live, an income stream could be generated that would cover all costs. More, the extent of the project would allow strategies of mixing that could help redress high levels of residential segregation in the affected areas. 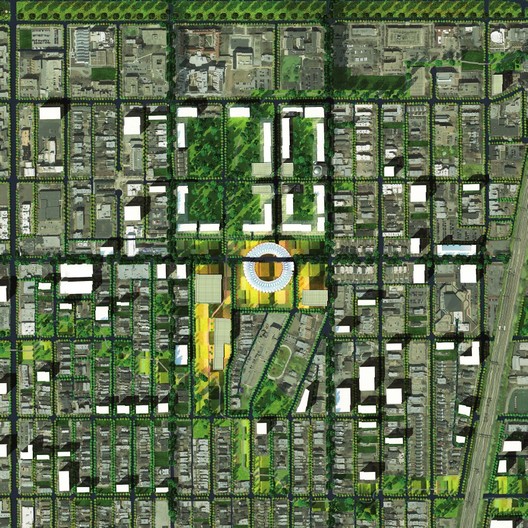