The ‘Far Rockaway: Accommodating Nature’ proposal by archedesign for the MOMA PS1 Rockaway Call for Ideas accommodates nature, instead of fighting it. Selected as one of the winning entries, the concept both creates a more fluid connection between the urban neighborhood and the surrounding water, and helps to minimize future environmental damage. It does this by re-purposing the concrete structures remaining from the dilapidated boardwalk, and creating pathways that will channel surge water to flow between the ocean and the bay. More images and architects’ description after the break.

Far Rockaway lies on a long, narrow peninsula that is effectively a barrier island with the Atlantic Ocean on one side and Jamaica bay on the other. The proposal focuses on two main ideas: re-purposing the concrete structures remaining from the dilapidated boardwalk, and creating pathways that will channel surge water to flow between the ocean and the bay.

Instead of re-building the horizontal boardwalk, which created a visual barrier to the ocean, we would re-utilize the existing concrete structures that remain of the boardwalk and re-integrate them into the natural environment.  These concrete piers located among the dune will become the key element for stabilizing them as they will naturally protect the vegetation from the harsh wind and ocean allowing them to grow.

We would help reshape the dune in such a way as to manage surge water more effectively.  In the event of a storm surge, water should be channeled to select streets running perpendicular to the ocean by using retaining walls and other movable devices.  In this way, ocean water could flow through to the bay and vice versa, avoiding substantial flooding.

The existing concrete piers will also accommodate small platforms for the public, located at regular intervals, such as bathrooms and concessions.  These new structures, placed perpendicular to the ocean not parallel to it as in the case of the old boardwalk, will help create a more fluid connection between the ocean, the urban fabric of the neighborhood, and the bay. 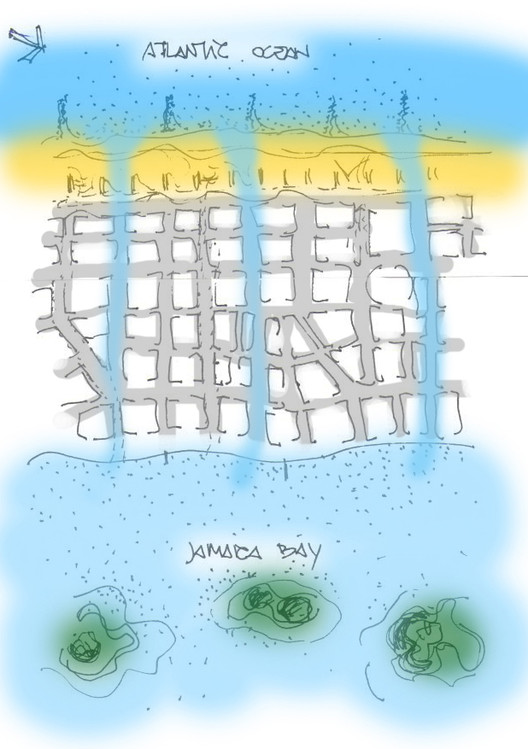