Save
The Winged House / K2LD Architects 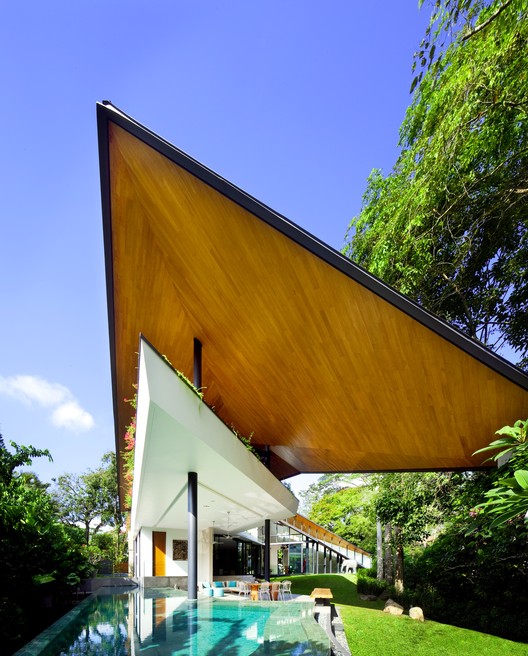 A private family residence situated on a uniquely shaped triangular plot, the Winged House frames the site with two prominent forms – the trapeziums. These forms open towards the main view at the back of the site where 3 existing majestic palms are, and of lush greenery. These embracing forms carve out and frame a middle garden for friendly and private gatherings.

In response to the tropical climate context, the formal exploration took a turn from cutting openings from a pure trapezoid form to separating roof from form.  The form draws from the understanding of traditional Malay architecture where the house itself is climatically responsive to bring comfort to its inhabitants.  The form of the traditional Malay house is reinterpreted into folding trapeziums whilst keeping its climatic purpose of bringing in fresh air into its interior space. Elements such as the extended overhanging eaves and the double pitched roof are adopted into the form.  The extended overhanging eaves are manifested in the form of extensive roof overhangs for the naturally ventilated spaces, which are enjoyed with much shelter and shade even during the seasonal heavy rain downpours.

The traditional double pitched roof is translated into the separation and staggering of the roof form.  This split of the roof achieved a play of light and shadows into the interior space. Spaces such as the double volume Dining room, the 2nd storey passageway and the large Patio are all celebrated with the overlapping split roof and its light play. This slot is further enhanced at night with concealed light fittings illuminating the split. The staggered roof form also creates for the possibility of the penetration of natural ventilation into the living spaces.

Materiality is key to strengthening the relationship of the two winged forms, its space in-between and roof on roof. In the intermediate space between two forms is the main entrance foyer and Living room which is flanked with two feature natural split granite walls, contrasting its heavy presence with the lightness of the roofs and vertical timber lines of the house. Timber is extensively used throughout the house, choosing a lighter species of timber (Burmese Teak) for the underside of the roofs versus the darker wood (Chengai) as the infill medium (ie: the sun-shading screens) to create a play of depth of the façade. The vertical timber screens not only help in providing shade from the harsh sun, but it helps blend the house with the lush vertical tree trunks of the surrounding greenery.

The Winged House, in its formal expressions and material language, results in an abode that sits snugly in its context in a quiet ‘winged’ embrace of the site and dwelling within. 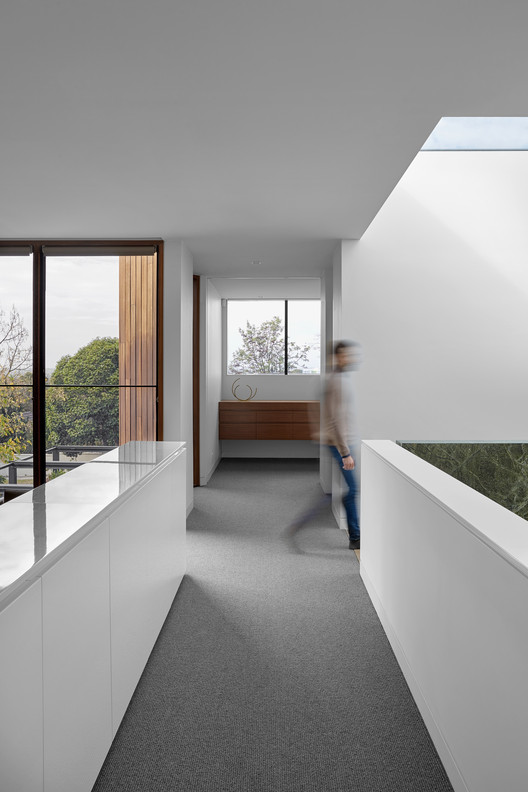